After losing leading rebounder to season-ending injury, senior forward Monique Terry has stepped up for the Aztecs. 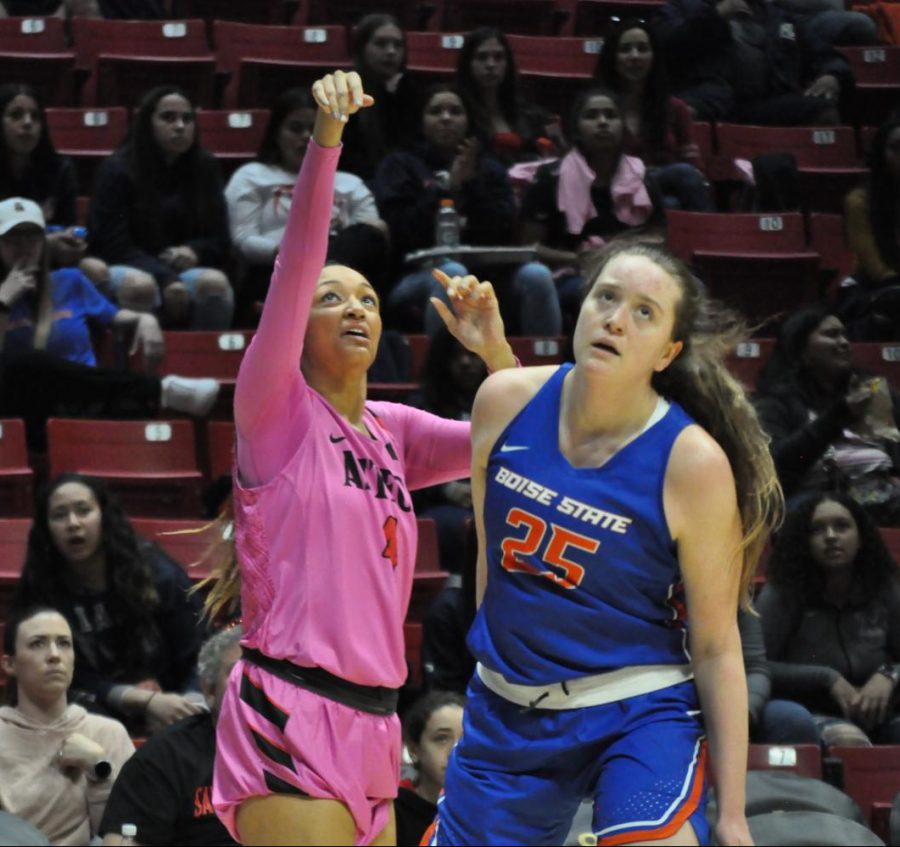 Senior forward Monique Terry fires a 3-pointer over a Boise State defender during the Aztecs' 69-67 overtime loss on Feb. 15 at Viejas Arena.

Most of the team’s core remained intact even after a few roster changes, including the program’s all-time single-season 3-point record holder in Najé Murray who transferred to Cal.

SDSU hasn’t lost focus of wanting to hang another banner in Viejas Arena.

Six games into this season, however, the Aztecs had a major setback.

A knee injury hit sophomore forward Mallory Adams, the team’s leading rebounder, sidelining her for the rest of the year.

Adams is expected to be ready by the start of the 2020-21 campaign.

So after losing a starter, the question then came for the Aztecs: who is going to step up in Adams’ absence?

Ask anyone and they’ll say the same two words: .

In 19 starts since, Terry surpassed her personal bests in points, rebounds, blocks and assists.

She had back-to-back career-highs in points against Utah State and Wyoming on Jan. 4 and 8.

Terry’s ability as a playmaker was on full display in the Aztecs’ first meeting against the Cowgirls.

Following a 67-60 win in overtime, Terry posted 14 points, seven rebounds and four assists in 35 minutes for the Aztecs.

It didn’t take long to see what everyone was talking about.

The bank was open and “Mo-Money” was writing checks you could cash in.

If there’s one way to describe how the Aztecs’ opponents must feel, the Notorious B.I.G. “Biggie Smalls” may have said it best when he said, “Mo Money Mo Problems.”

Terry even has a sticker with the phrase posted on her locker room.

Her production may come as a surprise to some, but not for the Aztecs.

“Monique works her tail off. She’s in the gym every day getting extra shots before and after shootarounds,” Terry-Hutson said. “I’m really happy to see some of her hard work pay off. She’s been prepped and ready for these moments.”

Whether it’s knocking down shots, setting up plays or taking hard fouls, Terry contributes for her team.

“It’s not about the way you played or how you did or what the stats look like,” she said. “It’s about if we won and if the team and coaches are happy about the win.”

Terry was raised in San Antonio, Texas to her two parents, Steven and Elizabeth Terry.

Back on Dec. 21, Terry and her teammate Sophia Ramos shared a special moment playing in their hometown against the University of Incarnate Word, winning 57-48.

“It was huge for us and huge for her,” Elizabeth Terry said. “The energy brought to the game from our family, friends, trainers, coaches and Ramos’ family was the most amazing thing.”

Her career started during her freshman year at Brennan High School after she tried out for the basketball team.

While playing for the Bears, Terry had accolades such as defensive player of the year and was the only player in District 27-6A to average a double-double during her junior year.

Teammates called her “Mo” which turned into “Mo Money” because Terry has been known for hitting big shots during crunch time.

“You can’t just come up with your own nickname in any sport,” her father Steven Terry said. “Your peers, the people that you play, the people you’re with every day, they get to witness you on a daily basis, and that’s where the nickname comes from.”

Fresh out of high school, Terry was a McDonald’s All-American nominee who earned a scouting grade of 89 and was rated as a three-star recruit, according to ESPNW.

Division I offers came, but after exploring all options “Mo Money” took her talents to the Mesa.

“Coach (Terry-Hutson) assured me how basketball was just a moment in life, but going to school would be more than just stepping on the hard floor,” Terry said. “She told me how the educational part is what is really important because we won’t be running on the hard floor forever.”

Majoring in geological sciences, Terry’s game speaks in the classroom too.

She was on the Mountain West All-Academic Team during her freshman year and earned an SDSU scholar-athlete distinction as well.

Terry’s mother said seeing her daughter succeed not just in sports but in education as well makes her a proud parent.

“We’re proud of all the work on the court,” Elizabeth Terry told The Daily Aztec. “It’s amazing to have those accolades and see her game blossom, but we’re even prouder of her classroom accomplishments because we know that type of work ethic is what’s going to lead into the later success of what she’ll see out in the real world.”

The Aztecs with three games left in the regular season before the conference tournament begins.

Terry and the Aztecs begin their quest for that coveted championship banner on March 1 at the Thomas and Mack Center in Las Vegas.