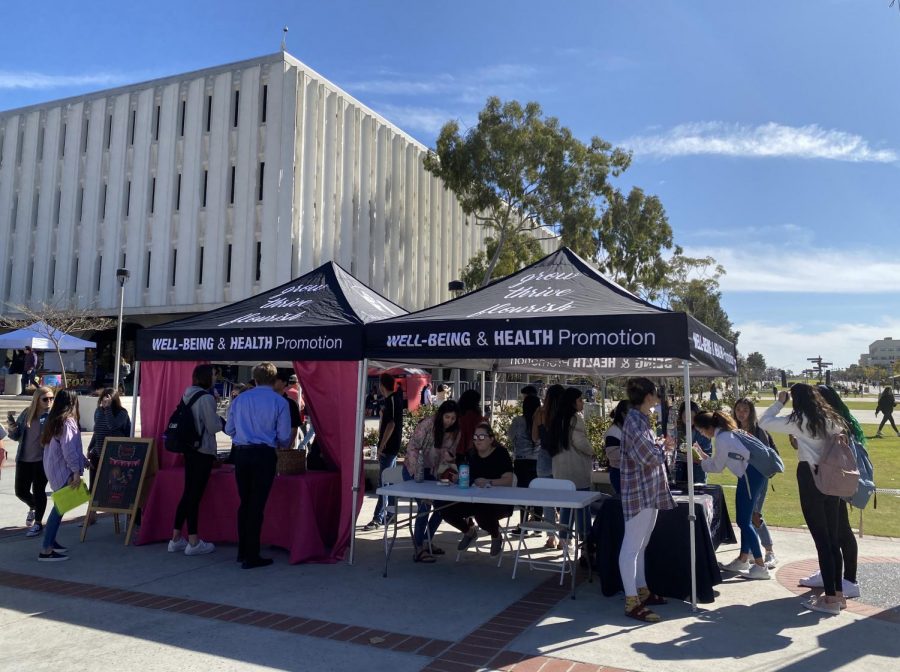 FratMANners and SISSTER partnered with Well-Being and Health Promotion to start the conversation about consent, sexual assault and violence on college campuses.

Sexual assault on college campuses is often viewed as taboo to talk about publicly, but San Diego State’s Well-Being and Health Promotion Department has been tackling this issue head on with their “Every Kiss Begins with Consent” event held at Campanile Walkway on Feb. 13.

Hosted by peer-health programs FratMANners and SISSTER, the two Greek programs aim to start the conversation about consent and educate students on sexual assault and violence on college campuses.

Communication junior and SISSTER member Billie Wakeham said the stigma around speaking out against sexual assault is a prominent issue that needs to be directly addressed in order to confront the broader issue.

“I know a lot of people that were affected by sexual assault, and I feel that there isn’t enough awareness about it on campus personally,” Wakeham said. “It’s kind of a taboo topic not a lot of people like to talk about so we’re here to break the stereotypes and stigma around it.”

SISSTER President and marketing senior Gianna McCrystal said the prevalence of hookup culture on college campuses makes events like these pivotal to providing a clear definition on what exactly is consent.

“Hookup culture is a big thing on college campuses, so we want people to be educated and use safe precautions when having sex,” McCrystal said. “It’s important to let people know that you have a choice in whether or not you want to engage in anything that you’re doing.”

Students passing by the tents received free safe sex supplies such as condoms, as well as fliers and stickers including important information on consent, STIs, birth control and campus resources regarding sexual violence and rape.

These fliers contained concise definitions on the differences between sexual violence, assault, rape and consent for sexual contact. It also includes several tips on ensuring safety on and off campus as well as important steps for what to do when talking to someone who has been victimized. Some of these tips include keeping an eye on friends and stepping in when inappropriate situations occur.

Computer science junior Andrew Barrett said it’s important to keep the dialogue on sexual assault open and constant due to the tendency for the issue to be widely ignored.

“Too often it’s swept under the rug and it’s ignored,” Barrett said. “Us coming out here and spreading awareness on the issue is us trying to tell the community and tell the campus that this is not something that’s okay.”

Political science and communication sophomore Theo Hansen said events like these are part of SDSU’s ‘Let’s Talk’ campaign, which aims to have students open up and comfortably talk and address sexual violence not just on campus but outside as well.

“The ‘Let’s Talk’ movement is (for) creating a safe space for people to talk about the issues that are happening on campus and the issues that we see around houses,” Hansen said. “Unfortunately, I’ve had people tell me some things that happened to them, and if I didn’t have this training, then I would have no idea how to advise them on what to do.”

More information and resources to contact regarding sexual violence can be found on SDSU’s Let’s Talk website.