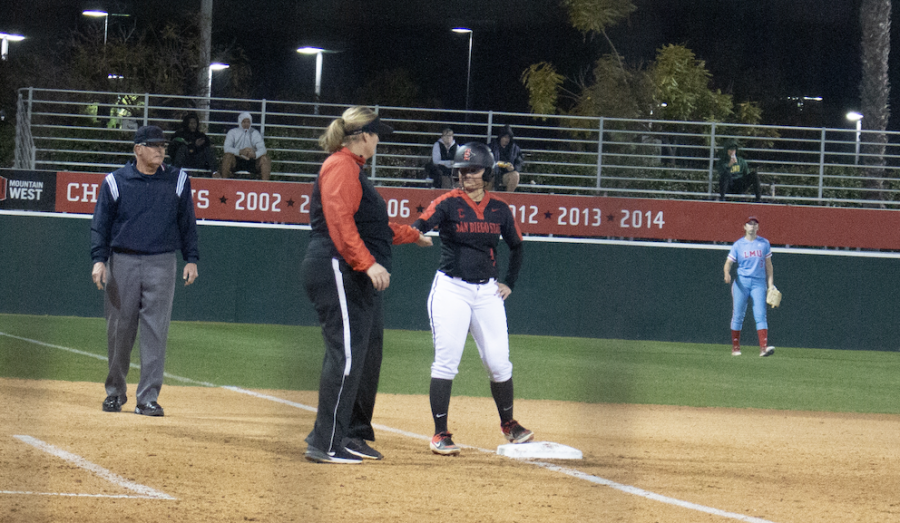 Senior left fielder Kristen Parker reaches third base during the Aztecs' 8-1 win over Loyola Marymount on Feb. 18 at SDSU Softball Stadium. Parker ended the game with a double and two RBIs.

LMU struck first with a run in the top of the second inning, but SDSU’s offense rallied together in the bottom half to put the Aztecs on top with 4-1.

Head coach Kathy Van Wyk said it was important for the offense to bounce back.

“I thought our offense did a great job tonight of adjusting to the pitcher and what she was throwing,” Van Wyk said. “It’s really important for them to get to momentum back and keep it on our side.”

The scoring for the Aztecs started when freshman catcher Sadie Langlet hit a two-run home run to left field in the bottom of the second inning.

“I think we all play for that little girl who grew up loving the game,” Langlet said. “For me to hit that home run in college for the first time was an absolutely amazing feeling.”

The Aztecs’ offense scored the rest of the runs through base hits, capitalizing off errors made by LMU. The Lions had a total of three errors and one wild pitch that allowed SDSU to score.

Van Wyk said the Aztecs did well to take advantage of the other team’s mistakes.

“They had several errors, and helped us out quite a bit. But I thought that we had some balls that we hit really well,” Van Wyk said. “We obviously need the hitting, but to be running the bases the way they did was good to take advantage of.”

But the pitching for the Aztecs was also a struggle early in the game.

“I felt myself working a little too fast,” Moreno said. “I had my teammates behind me trying to calm me down and I tried to breathe. Once I did that, I lowered my pitch count and felt more relaxed.”

Moreno added the scoring during the second inning helped her poise.

“I felt a lot more confident,” Moreno said. “I knew that they were going to score some runs eventually, so when they started scoring in the beginning it definitely boosted my confidence.”

Van Wyk said Moreno struggled but improved throughout the game.

“Marissa has not been as strong as she’s capable of, so it was nice to see her settle in,” Van Wyk said. “It took a while, and she knew she had too many walks and threw too many pitches. But for the most part, she looked better tonight and more sharp. She struggled through some things and did well through them, and that’s the sign of a good player.”

Moreno ended the night with 86 pitches before sophomore pitcher Hannah Johnson came in during the sixth inning. Junior Maggie Balint closed the game, holding LMU to only one run.

Langlet said she maintains good bonds with all the pitchers to ensure they are comfortable during the game.

“It’s huge for a catcher and pitcher to have a good relationship and it’s really key that we’re all on the same page,” Langlet said. “Whether it’s the pitches or making sure she’s comfortable knowing what she’s throwing, it’s huge to have that relationship and I have great relationships with all my pitchers.”

Van Wyk said her only complaint was the team was not able to finish the game as early as they could have.

The Aztecs’ next games are on Thursday in a doubleheader against Idaho State and Notre Dame in the Mary Nutter Collegiate Classic in Cathedral City, California.