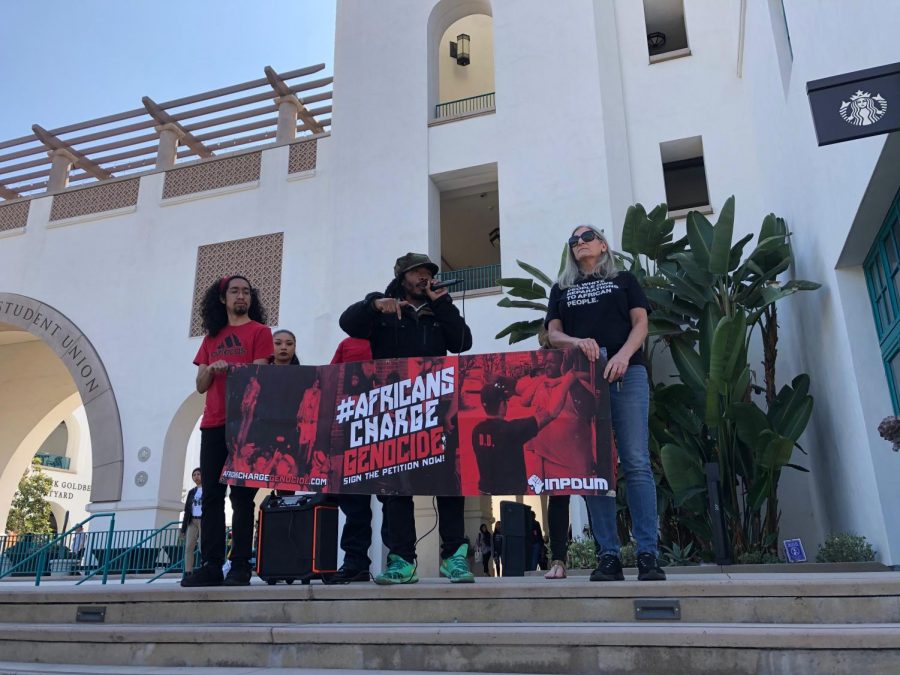 On Feb. 19, students and faculty of the Africans Charge Genocide group protested the potential ban on formerly selected guest speakers Ava Muhammad and Omali Yeshitela, both of whom have been widely accused of being anti-Semitic.

The protest was organized by the International People’s Democratic Uhuru Movement.

“We affirm that statements that are hateful, anti-Semitic, or in opposition to individuals of Jewish faith or ethnicity are counter to our core campus values,” the statement read. “We find hateful comments to be reprehensible, as they are against our goals of creating a welcoming and affirming environment for all communities.”

The demonstration took place in the Conrad Prebys Student Union, where members of the organization argued the guest speakers should not have been uninvited to a university event scheduled to occur sometime during the spring 2020 semester.

The nature of Muhammad and Yeshitela’s previously given speeches about anti-Semitism was brought to the university’s attention after the annoucement about the Reparations Summit and the list of guest speakers was released to the public.

The Reparations Summit is funded by the Student Success Fee through a $68,000 grant, according to the SDSU College of Education.

SDSU Director of Jewish Studies Risa Levitt said she was disturbed to see hate speech against Jewish people being used to during the event.

“I think I witnessed a lot of hate,” she said “As a faculty member who has been on this campus for a long long time, I think that’s very disturbing.”

Ava Muhammand is widely accused of being anti-Semitic due to a panel response in a viral video of her referring to Jewish people as “godless.” She also said, “We will be free of this bloodsucking parasite so they will no longer be able to sell us alcohol, drugs, depraved sex, and every other type of low-life thing that is keeping us from hereafter,” in a panel response.

“What came to my attention was one of the proposed speakers in the summit was Ava Muhammand who is online and in print very clearly spouting hate language spouting anti-Semitic, anti-zionist tropes, “Levitt said. “…the issue was in a state university, where the funds for this particular summit were coming directly from tuition of students, wasn’t appropriate to invite a speaker with that sort of reputation to campus to speak on issues.”

The university released a statement to address the topic while upholding freedom of speech and protecting Jewish students from hate speech on campus. They said the speakers that were expected to speak at the Reparations Summit have not been formally banned or uninvited. The only aspect of the event that has been approved is the topic, which will focus on slavery and reparations.

The statement concluded by stating that SDSU stands with the school’s Jewish community and that no guest speakers have been confirmed for the upcoming event.

In regards to the Reparations Summit itself, Levitt said she does not have a dispute with the topic. Her concern lies with the hate speech that was used in protest today, and that it may be used at SDSU again in the future.

“I think we are all open to object research on any given topic but when hate speech enters into the dialogue at a university that toutes itself as being a leader in openness, acceptance and diversity, then I think you do run into a problem,” Levitt said.

“A number of community members have raised concern about an event held yesterday by an outside group on campus, during which anti-Semitic and racial terms were used,” de la Torre said. “An important truth exists: we have a responsibility to protect free speech, even when certain speech seeks to defame or demean. Nevertheless, speech that is anti-Semitic or encourages hatred of a particular group, is reprehensible and counter to the inclusive environment we support at SDSU.”

Currently, the event is still pending approval through the Event Application System.