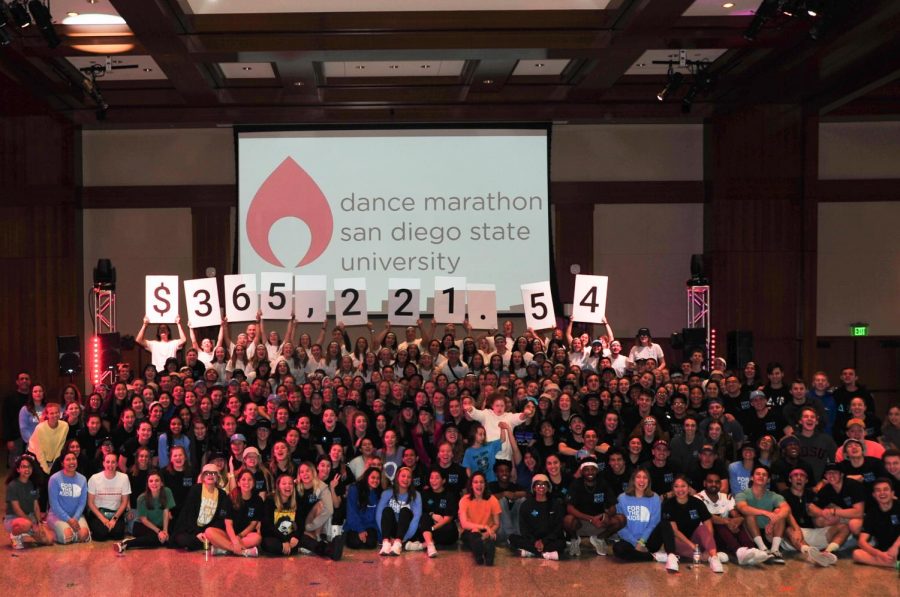 This year’s Dance Marathon at SDSU, like in previous years, was held with the goal of gathering funds towards San Diego Rady Children’s Hospital. The goal this year was to raise more than last year’s total of $322,219.54. The group was able to raise that amount, and then some, according to Public Relations Director and marketing senior Kate Frels.

The first Dance Marathon at SDSU was established in 2014 by SDSU alumna Emily Carper. From that point, more than $800,000 dollars has been raised for San Diego Rady Children’s Hospital. It is the largest student-run philanthropic movement at SDSU, according to its website.
The effort was a culmination of more than six months of campaigning and 15 hours of non-stop dancing.

“We are just so humbled and grateful to have the students behind us backing all the kids that we treat every year,” King said. “It’s incredible to watch these over 800 students come together for every single kid that we treat, over the 250,000 kids we treat, in the hospital every year.”

Many young patients and their families spoke at the event, including the father of Bryn Rathweg. Rathweg was this year’s Dance Marathon executive board’s “Rady Rockstar.”

At just three months old, Rathweg was diagnosed with anaplastic ependymoma, a rare and aggressive form of brain tumor that is difficult to treat. She endured. Now, at 10 years old, Rathweg remains cancer-free.

“What the kids are going through is extremely challenging,” Assistant Associate Director of Philosophy for Rady Children’s Hospital Casey Birkdale said. “We have multiple families facing life-altering complications so having these dancers behind them really makes all the difference in reminding them that they’re not fighting alone.”

Throughout the night, a student, child or family member spoke at every hour to share their stories of how they have been affected by major health issues in their lives.

Kinesiology senior Hannah Brunty was dancing for the event for the first time and said she found it to be a humbling experience.

“I don’t realize how lucky I am and fortunate,” Brunty said. “Coming here and giving up one night for the kids that don’t have a choice is really inspiring and it makes you view things differently.”

Marketing senior Allie Fernandez said she also found her experience at the event to be humbling, and for her, it’s personal.

“I have a family friend who’s been at Children’s Hospital LA for months,” she said. “It feels really humbling to know we’re helping families like hers. It makes the goal of raising money so much more personal and imaginable.”

There was also a candlelight vigil for former patient Madison Georgine Taylor held at midnight.