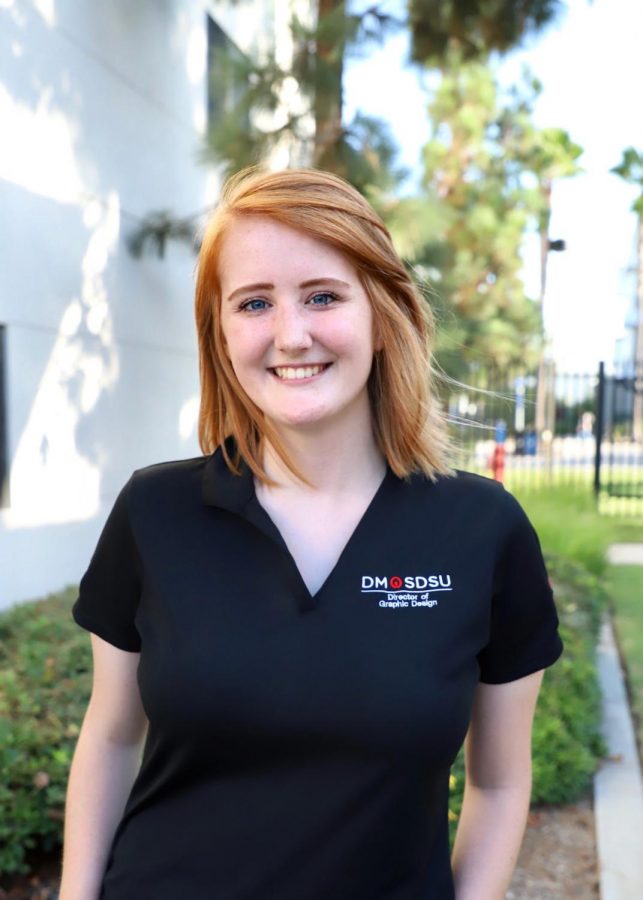 Journalism and Spanish senior Chelsey Crowne has been involved Aztec Dance Marathon for three years because of her passion for the fundraiser.

Journalism and Spanish senior Chelsey Crowne has been raising money to fight against childhood cancer since she was 11 years old.

This will be Crowne’s third year participating in the Aztec Dance Marathon fundraiser. Last year, she was a team captain, and now she is a part of the executive board. As the director of graphic design, Crowne comes up with all of the artwork for the event, such as the merchandise, social media posts and event slides.

Aztec Dance Marathon is a year-long fundraising effort to raise money for Rady Children’s Hospital in San Diego. The fundraiser ends in a 15-hour dance marathon, held in Montezuma Hall.

“The whole premise is that it’s one night to dance for the kids who can’t,” Crowne said. “We don’t sit down, we don’t sleep, we don’t stop the whole night in honor of those super brave kids who don’t get the option to sit down or sleep or stop fighting. It’s not just an event where people dance in a room for 15 hours. We have speakers every hour (and) five different themes throughout the night.”

Crowne is very passionate about fighting against childhood cancer. One of her childhood friends, Robyn, was diagnosed with stage four neuroblastoma at the age of seven. The two girls had a very strong bond together, as Crowne thought of Robyn as her little sister. After Robyn passed away, Crowne was determined to make a difference for other children fighting cancer.

“Aztec Dance Marathon is special to me because for so long, I was so angry and so bitter that this beautiful child … had her future stolen from her,” Crowne said. “I spent so many hours in high school printing out petitions trying to get people to help me to light up the Empire State Building gold for childhood cancer awareness month and hosting bake sales … (to do) everything I could to raise money to fight against this insidious disease and other childhood illnesses.”

During her sophomore year, one of Crowne’s friends suggested she participate in Aztec Dance Marathon, but the majority of her friend group had left around 1 a.m. Right before she was going to leave, she heard a speaker that particularly resonated with her because they were a survivor of the same kind of cancer that Robyn fought. It was at this moment that Crowne knew she was meant to do Aztec Dance Marathon forever.

Now, Crowne wears Robyn’s name on her wrist as a constant reminder of why she fights.

The symbolism behind 365 is to honor their Rady rockstar, Brynn, who had an extremely rare brain tumor. She fought in the hospital for 365 days and has been cancer free for years.

Crowne knows she will be a part of Aztec Dance Marathon for the rest of her life because of how significant and meaningful it is for the children.