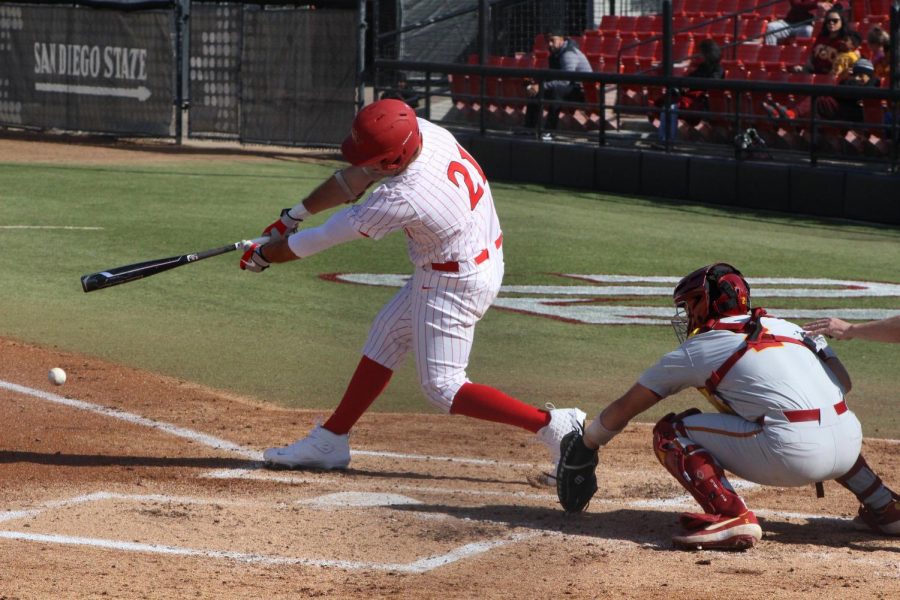 Sophomore first baseman and pitcher Brian Leonhardt swings at a pitch during SDSU’s 11-5 loss to USC on Feb. 23 at Tony Gwynn Stadium.

San Diego State baseball lost 11-5 to Southern California after giving up a five-run fifth inning and a two-run seventh inning on Feb. 23 at Tony Gwynn Stadium to conclude the 2020 Tony Gwynn Legacy.

SDSU started the weekend by defeating Big 10 teams in Iowa and Nebraska by final scores of 4-1 and 4-2.

Here are three observations from the Aztecs’ (6-1) loss against the Trojans (3-3) and from the weekend’s tournament.

1. A successful 2020 Tony Gwynn Legacy for the Aztecs

Despite not getting the sweep, SDSU came away with two wins in three games in the Tony Gwynn Legacy.

The wins came against Iowa on Feb. 21 and Nebraska on Feb. 22 before the loss against USC.

“It might be the first time we’ve won two out of three games in the Tony Gwynn Legacy, so it feels good, but we’re disappointed because we had the opportunity to be 6-1 after the week,” Martinez said.

The two wins in the fifth annual Tony Gwynn Legacy wasn’t the first time the Aztecs took two games in the tournament. The 2020 success marked the third time in the last five years the Aztecs’ have had a two-win tournament.

Sophomore first baseman and pitcher Brian Leonhardt said winning two of the three games was a success for the Aztecs.

“It’s huge, we won the weekend although it seems like we’re crushed right now,” he said.

Of USC’s 11 runs, only four were earned runs with the rest coming via four Aztec errors.

The mistakes began in the fifth inning when SDSU held a 5-0 lead.

Sophomore pitcher Aaron Eden allowed a walk to Trojans senior second baseman Tyler Pritchard. A throwing error from junior third baseman Casey Schmitt allowed one run to score and runners to reach first and second base with one out.

Martinez said the Aztecs didn’t support Eden in his outing.

The sophomore right-hander said it tough to leave the ballgame early after allowing just one hit in the first four innings.

“I did good all the way up to the fourth (inning) and in the fifth (inning), they just started hitting the ball,” Eden said.

The errors continued in the seventh and ninth innings for SDSU.

A fielding error from freshman second baseman Caden Miller allowed one run to score and a throwing error from sophomore catcher Wyatt Hendrie allowed another run to make it a 7-5 game.

Martinez said the defensive struggles gave away a possible win.

3. Balance throughout the SDSU lineup against USC

The Aztecs received 13 hits from seven of their nine starting players in the loss.

Orr’s three-hit game also included two RBIs after a two-out single made it a 5-0 ballgame in the fourth inning.

A sacrifice bunt from junior shortstop Anthony Walters advanced runners to second and third base to set up sophomore catcher Wyatt Hendrie’s two-RBI single in the third inning.

Martinez said the Aztecs still need to find a balance as a whole.

“We’ve shown we can swing the bat,” he said. “We’ve been doing that all season. The biggest thing for us is we’ve got to find a way to pitch and play defense. We’re going to find a way to manufacture runs.”

The Aztecs are back in action at home when they take on Oregon State in a four-game series starting on Feb. 27.