A look into the upcoming San Diego Latino Film Festival 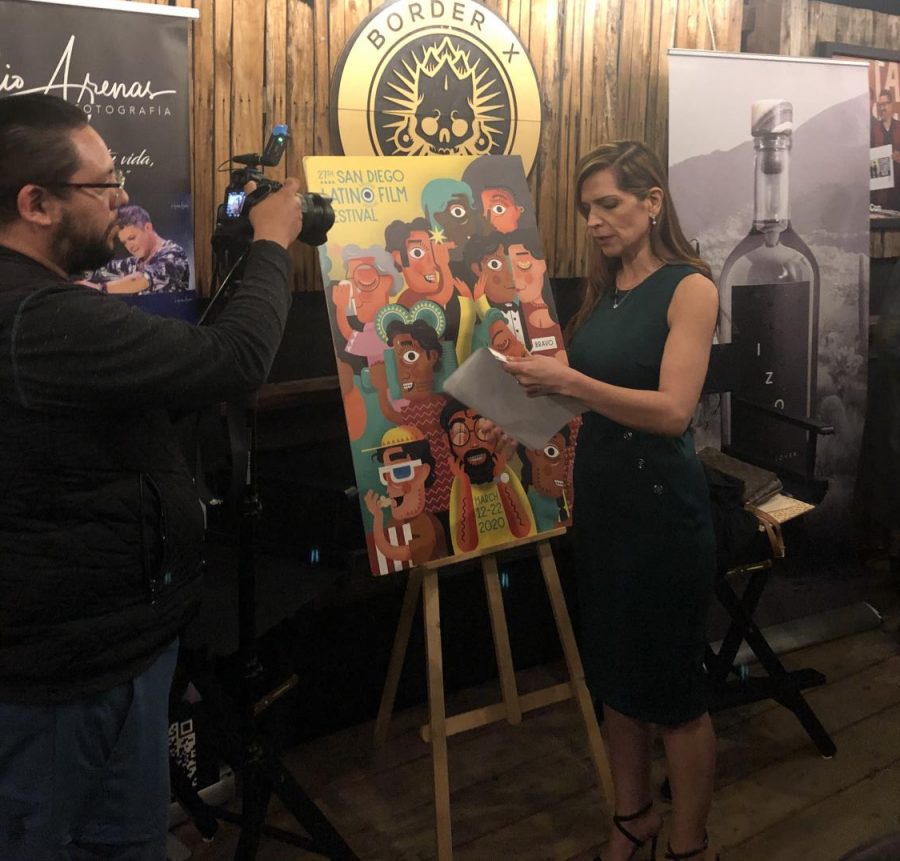 Reporters got to interview directors and filmmakers at the kick off event.

Less than 20 miles from the U.S.-Mexico border in Barrio Logan, the San Diego Latino Film Festival kicked off with a celebration of filmmaking at Border X Brewery.

To mark their upcoming 27th anniversary, the festival held a Media Kickoff Party, giving the press a chance to mingle with stars, directors and festival organizers.

The festival’s founder Ethan Van Thillo began the festival in 1993 as a student film festival, using advice from one of his former professors at the University of California, Santa Cruz. The goal is to help inspire all audiences along with encouraging interest in Latino culture, he said.

“It’s about using film as a tool to help young Latinos see themselves on the screen, and see more positive and accurate portrayals,” Van Thillo said. “Hopefully it’s a tool that helps general audiences across the United States learn more about the Latino culture.”

Mexican Director Fernando Fisher, whose horror short “Perturbado (Disturbed)” is being screened on March 19, said he’s a big fan of the festival because it’s a comfortable environment for Latinos.

One of the festival’s most anticipated films is the destination comedy “In Other Words,” starring former Saturday Night Live star Chris Kattan. The film follows an American matchmaking app developer in San Diego who travels to Valle de Guadalupe, Mexico to meet a woman he matched with.

The film’s writer Cristina Nava said the thing she loves most about the festival is the array of Latin experiences shown on-screen.

“I love hearing the diverse stories,” Nava said. “Latinos have so many tales to tell.”

Nava’s husband, Patrick Perez Vidauri, is the director of the anticipated “In Other Words.” He has been attending the festival since 2000, witnessing the festival’s growth firsthand.

“It’s become one of the premier venues for Latino films,” Perez Vidauri said.

Nava acknowledged that although it’s great to show Latin stories to a Latin audience, it’s important to share these stories with non-Latin audiences as well. She hopes her film will resonate with all audiences because it’s a romantic story that everyone can relate to.

“It’s a crossover movie but the story is universal,” Nava said. “Plus, who doesn’t love love?”

Despite a recent increase in the popularity of foreign films, Perez Vidauri believes Latinos haven’t seen enough growth on-screen throughout the past decade when compared to other minorities in Hollywood. To solve this issue, he says it’s important for Latinos to foster their own experiences and distribute them themselves if they want to increase their representation in Hollywood.

“We need to write, produce, direct our own stories if we want to see the change,” Perez Vidauri said. “Latinos in our movies are people that are outside of what Hollywood usually casts us as.”

“It’s never like a busboy, a gangbanger, a maid,” Perez Vidauir said. “Everyone is just people, often with really good jobs.”

The San Diego Latino Film Festival will take place from March 12 to 22, screening more than 175 films, shorts and documentaries from the United States, Latin America and Spain. Some of the films will be shown at AMC 18 Fashion Valley theaters and Digital Gym CINEMA in North Park. Some others will be on campus.