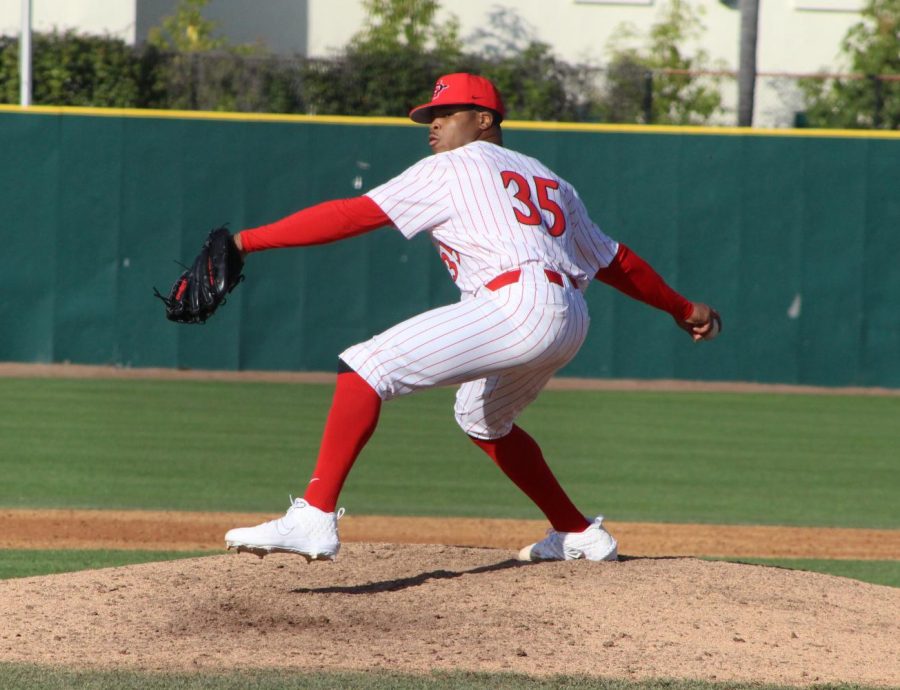 Sophomore pitcher Aaron Eden winds up to throw a pitch during the Aztecs' 11-5 loss to Southern California on Feb. 23 at Tony Gwynn Stadium.

The Aztecs started the series losing the first two games to the Beavers by final scores of 13-1 and 4-1 on Thursday and Friday, respectively.

But they were able to earn a series split on with the Sunday victory and a 6-0 shutout Saturday.

Here are three observations from the Aztecs’ (8-4) win against the Beavers and this weekend’s series.

On Sunday afternoon as well as the latter part of the series, SDSU’s offense finally started to drive in runs.

A throwing error by Beavers pitcher Jake Mulholland led to a run scored by sophomore right fielder Jaden Fein in the third inning.

It all started to go in the Aztecs’ favor during the fourth inning, when sophomore first baseman Brian Leonhardt hit a grand slam, tying the game at 6-6.

“(Martinez) told me to slow down and just trust your plan,” Leonhardt said. “I lost all my thoughts and just focused on seeing that slider up and I got it, I took my best swing off.”

In the fifth inning, junior center fielder Matt Rudick hit a leadoff triple and scored off a wild pitch. After a double from Schmitt and a single from senior left fielder Ryan Orr, the Aztecs plated another run via a sacrifice fly from junior shortstop Anthony Walters.

The Aztecs also plated four runs during the sixth and seventh innings thanks to a solo home run from sophomore catcher Wyatt Hendrie, an RBI double from senior designated hitter Jacob Cruce and a two-run single from Fein.

Martinez said the goal for the team is to always try and score runs in every inning and put pressure on the opposing team.

“We told our guys that we want to score every inning,” Martinez said. “We wanted to keep the pressure on them and we knew they were a little depleted as well. The score indicated that and with 23 runs it was a hard-fought deal.”

Sophomore pitcher Aaron Eden got the start and went 3.1 innings on 82 pitches, giving up four runs on seven hits with four strikeouts.

Junior pitcher Jacob Flores earned the victory despite only pitching 1.2 innings and giving up two runs on three hits.

Martinez thought the performance of the pitching staff was mainly due to playing the final game of a four-game series while having tired legs.

“I thought we struggled,” Martinez said. “Honestly, Aaron (Eden) didn’t pitch as well as he normally has and Flores is kind of on fumes right now. He’s a little tired.”

One caveat to the struggles was junior pitcher Tre Brown, who gave up zero hits and no earned runs on 25 pitches in two innings.

In the eighth inning, junior pitcher Casey O’Sullivan came in and gave up three earned runs along with two hits, bringing the Beavers back into the game at 12-9.

Martinez said he should have left Brown in during the eighth.

“Tre (Brown) pitched good,” he said “We probably should’ve left him in for another inning.”

After O’Sullivan gave up three runs, Martinez made a double switch, putting sophomore infielder David Alamillo at third base and moving Schmitt to the mound.

Despite a shaky start in giving up two runs, Schmitt was able to earn his fifth save of the season to give SDSU the victory.

“My mentality was to just throw strikes,” he said. “I try to get everyone out, make quality pitches, and let the people behind me on defense go to work.”

Martinez said he wants the team to continue to prove its worth on the mound and the field.

“I think we have to continue to prove, pitching-wise and on defense,” he said.

3. A successful series split for SDSU

Despite not getting a sweep against the Beavers, SDSU was able to win two games against a program that won the College World Series back in 2018.

Aztecs head coach Mark Martinez said taking a series split provides the program with two quality victories against a team that has been a good program for the past few years.

“It’s a good resume builder for us,” Martinez said. “With how we started, losing 13-1 on Thursday and then a tough night on Friday, coming back and winning the last two against a good program that has won a College World Series shows how much of a quality program we are.”

Junior third baseman Casey Schmitt said getting the series split was important for the team.

“It’s huge,” he said. “We’ve been working hard. We were down a little bit in the game early on but we came back and it’s huge for us as a team.”

The Aztecs are back in action against Long Beach State for a one-game series on March 3.