Lacrosse earns second victory of season with win against California 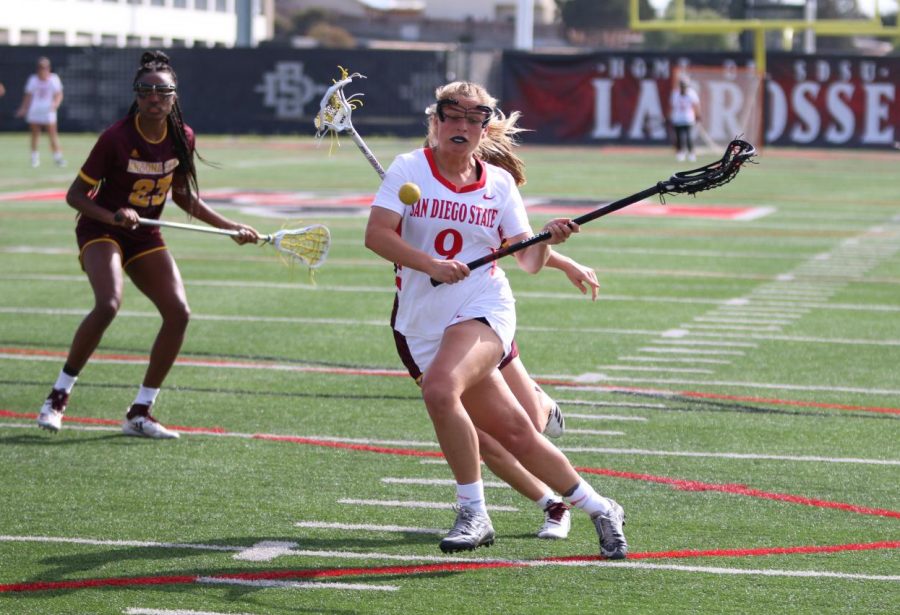 Senior midfielder Morgan Taylor attempts to secure possession of the ball during the Aztecs' 19-18 win over Arizona State on Feb. 20 at Aztec Lacrosse Field.

The Aztecs (2-2) earned their second win of the season thanks to a versatile offensive performance, with goals scored by ten different players.

Junior attacker Lexi Tan led the way with three goals on the night. She said her teammates put her in good positions in which she was able to score.

“I thought my teammates really helped me out tonight,” Tan said.

Head coach Kylee White was pleased with how her team performed on both ends of the field.

“We fought to the end tonight,” White said. “Our team speed really showed tonight and I think that was from our defense and through carrying the ball. It just shows they have trust in the things that we do well.”

The Aztecs started the first period striking early and often, taking a 5-1 lead in the first nine minutes.

Despite having nine goals on 23 shots in the first half, the Bears scored four unanswered goals in the final seven minutes of the period, cutting the lead to 9-6.

Junior attacker Julia Sheehan contributed two goals in the first period along with two assists. Like Tan, she said teamwork allowed the Aztecs to score as many goals as they did.

“It’s a team effort for us on offense,” Sheehan said.

In the second period, the Aztecs extended their lead to 11-7 with goals from sophomore midfielder Cailin Young and senior midfielder Morgan Taylor.

But California did not back down without a fight, scoring three goals to cut the SDSU lead to 13-10.

From there, the Scarlet and Black scored three goals in the final 3:21, leading to a 16-11 victory.

Senior goalkeeper Katy Sharretts, who entered the game as the back-to-back Mountain Pacific Sports Federation Defender of the Week, had 10 saves on the night.

White said Sharretts was the team’s rock on the defensive end.

“She’s the backbone of our defense,” White said. “Being a leader out there and having a calming presence I think gives everyone the confidence that they can do what they need to do on defense and that she’s got their back.”

Sheehan said having 10 players score goals shows how versatile the Aztecs are offensively.

“It shows we’re a very strong team and diverse on offense,” Sheehan said. “It’s harder for other teams to scout because every single one of us has our strengths and it’s not just one person it’s all of us.”

White wants to focus on cleaning up a few things on both ends of the field before the next game.

“We were in the battle for some of the ground balls, but I think we could get them a little bit cleaner,” White said. “I think having more options offensively again and staying through a game plan, see it through for 60 minutes is important.”

Up next for the Aztecs is a game against George Mason University on March 8 at Aztec Lacrosse Field.