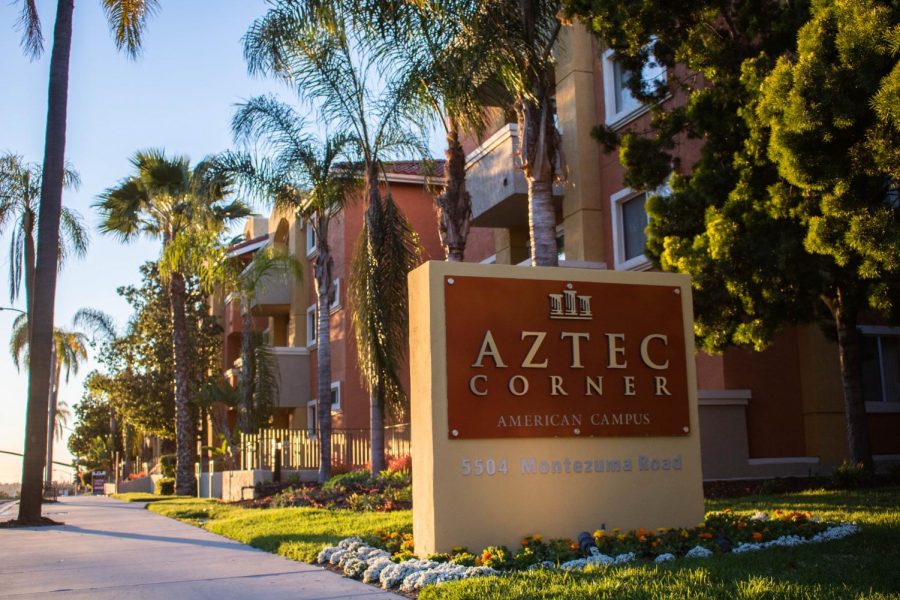 The university agreed to lease the apartment complex to accommodate more than 600 sophomores starting fall 2019.

Ever since San Diego State and Aztec Corner settled on a master lease agreement giving the university rights over the property, residents have been feeling dissatisfied with the increase in rental costs.

Because of the decision to acquire property rights, the apartment complex is now considered on campus property and rent prices raised significantly as a result.

Director of Housing Administration Cynthia Cervantes said in an email the switch to being on campus property does not necessarily mean the university owns the complex, but rather they own the right to control the building.

“This agreement means that SDSU retains the right to license the spaces within the building,” Cervantes said in an email response. “SDSU entered into a master lease agreement with Aztec Corner to support the university’s two-year residency requirement and in alignment with the Sophomore QUEST program offering.”

According to the Sophomore QUEST webpage, the educational program is designed to meet the needs of second-year students by providing a variety of campus resources and programs. Some of these programs include workshops and events tailored towards resume building and internship preparation.

Despite the efforts of fostering a community through the Sophomore QUEST program, many residents feel the higher rent prices as a result of being on campus property do not make living in the complex worth it.

The rise in rental prices in conjunction with the conditions of the complex and slow response times for maintenance requests prompted residents to create an online petition that outlined maintenance deficiencies.

Biology sophomore Jacob Calaway said although the complex has improved its maintenance services since the viral petition circulated last semester, it is still not worth the increased rent cost.

“They’ve improved their services, especially from last year. I feel like they’re a lot quicker on the uptake with everything,” Calaway said. “It’s not bad, but for what we’re paying, it’s not the best.”

Residents who lived in Aztec Corner prior to the switch agree that the current rent prices are too expensive, especially considering the building’s condition.

“Last year the rent was about $700 (a month) for a double which wasn’t bad at all considering how close it was to campus,” Adams said. “I know people who live there now and they pay more than $1000 which I think is way too expensive.”

Kinesiology junior Cecilia Diaz, who also was a previous resident, said it is unfortunate students have to pay higher prices, especially with all the issues and complaints related to maintenance.

“I think it’s terrible that people who live in Aztec Corner now have to pay so much and go through all those issues last semester,” Diaz said. “I’ve heard of people in some of my classes who had pretty bad complaints about the place.”

Calaway said although Aztec Corner has all the necessities needed in student housing, there are better housing options that are overall cheaper for students.

“(I don’t feel it’s worth it) because of other options that are out there and are less expensive than this one,” Calaway said. “The price is just a little more than I’d be paying.”

The three-year master lease first began in fall 2019 and will continue until fall 2022. Until then, SDSU will manage all leases and license agreements for the residents of the complex.