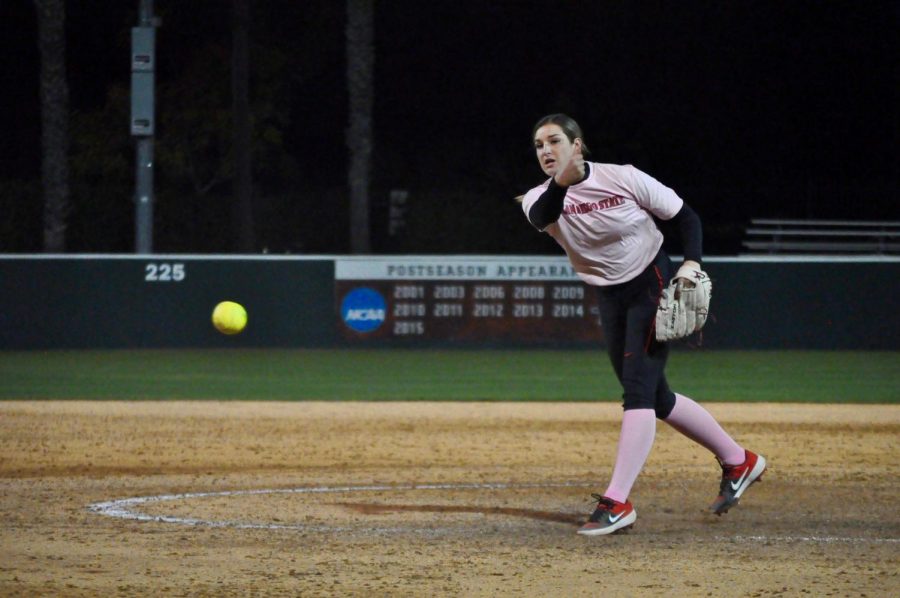 San Diego State softball fell short to defending national champions and No. 1-ranked UCLA by a score of 5-0 on Feb. 29 at the SDSU Softball Stadium.

It was a back and forth battle between the two teams as they persistently put runners in scoring positions. It was not until the top of the seventh inning with two outs that the Bruins’ (18-1) bats came alive and broke through with a 5-0 lead.

Head coach Kathy Van Wyk felt the Aztecs (13-8) did a great job against the number one team in the nation.

“We battled all the way until the seventh inning with two outs and I think we definitely had (UCLA),” Van Wyk said. “But it is a great game to build on and definitely take a lot of positives from.”

Redshirt sophomore Hannah Johnson started the game off in the circle for the Aztecs’ defense.

“I went out there thinking they were just like any other team,” Johnson said of the Bruins. “I knew I was going to pitch to the best of my ability and be there for my team tonight.”

Junior pitcher Maggie Balint came into the circle for the Aztecs in the top of the third inning and had a total of six strikeouts against UCLA.

Coach Van Wyk said she was proud of the pitching staff and how they held the Bruins scoreless for six innings.

“I wanted to see what Hannah could do against a good hitting team and she held them for almost a solid three innings, which we were all excited and pleased to see,” Van Wyk said.

The Aztecs were troubled offensively. UCLA junior pitcher Holly Azevedo and sophomore pitcher Megan Faramio mixed up their pitches, making the Aztecs guess which pitch was coming next.

“They have all types of pitches. They can throw up, down, in, out, change up,” Coach Van Wyk said. “We just have to go out there, get our hacks and not guess about what pitch is coming next.”

Oklahoma transfer junior outfielder Alexa Schultz had one of three hits for the Aztecs with a line-drive double to the right center field gap in the bottom of the fifth inning.

After her at bat, Schultz told her teammates to lower the bill of their helmets because if they see the ball going up, they know it is going to be a ball. She emphasized to see the ball low in the zone.

Schultz said the team was struggling with the pitchers’ rise balls.

“I was just thinking I had to stay in the zone and do whatever I could do for the team to get us going,” Schultz said.

Van Wyk said SDSU can compete with any opponent and the team should take a lot of confidence from a game like this.

“The score tonight was not indicative of how good the game really was,” Van Wyk said. “Anytime you can stay that close to a team like that that is where the confidence boost comes from.”