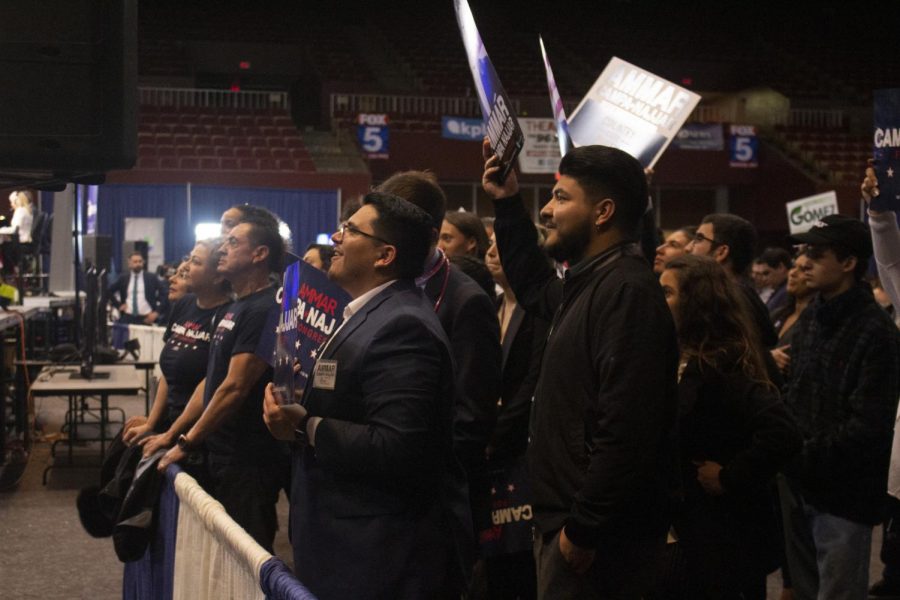 Supporters of Congressional candidate Ammar Campa-Najjar cheer on as candidates make their way around the media round robbin.

UPDATE (March 4, 9:45 a.m.): The races to become San Diego’s next mayor and representative from the 53rd Congressional District are still too close to call Wednesday morning.

With 100% of precincts reporting, Todd Gloria, a state assemblymember vying to replace outgoing Mayor Kevin Faulconer, will advance to the November general election.

It is still unclear, however, who his opponent will be.

Second and third place are held by two councilmembers, Scott Sherman and Barbara Bry, who are separated by a little more than 3,000 votes — a difference that could still be swayed by mail-in ballots and provisional votes still yet to be counted and reported by the San Diego County Registrar of Voters.

And in the 53rd district, where San Diego State and many of its students reside, the race for second place is also narrow, albeit by a larger margin.

With 100% of precincts reporting Wednesday morning, it appears whoever replaces retiring Rep. Susan Davis in the 53rd district is also a Democrat.

With an undetermined number of mail-in ballots and provisional voters still outstanding, both races remain too close to call.

The registrar of voters has until April 2 to certify the results of the election.

As polls closed in San Diego and across California on Super Tuesday, a number of local races remained too close to call.

Two local primaries — the race for the mayoral office and the 53rd Congressional District seat — featured open races. With San Diego Mayor Kevin Faulconer termed out of office and Representative Susan Davis retiring from Congress after serving for two decades, both contests saw numerous candidates from both parties enter the race.

Early results show Gloria with a commanding lead — and a tight race for second place between Sherman and Bry.

FINAL UPDATE: In the San Diego Mayoral contest, the race for second place is heating up.

Sherman is vying for a spot on the Nov. 3 ballot to prevent two Democrats from advancing to the general election, which would deny Republicans a chance to hold the office.

Although each candidate has a political party preference, all citywide offices are nonpartisan per California law.

In the 53rd Congressional race, Democrat Susan Davis is retiring after representing San Diego in Congress for two decades.

The contest to fill Davis’ seat is also too close to call. Two Democrats — Sara Jacobs and San Diego Council President Georgette Gomez — are first and second place, with Republican Chris Stoddard in a close third.

#UPDATE With 9% of precincts reporting, Sara Jacobs continues to lead Georgette Gomez and Chris Stoddard in the race to fill an open seat in the 53rd district.

Like the mayoral race, the top two candidates will advance to the November general election.

#UPDATE With 40% of precincts reporting, Bernie Sanders is the projected winner for the California Democratic primary.

Only a fraction of ballots have been counted in San Diego.