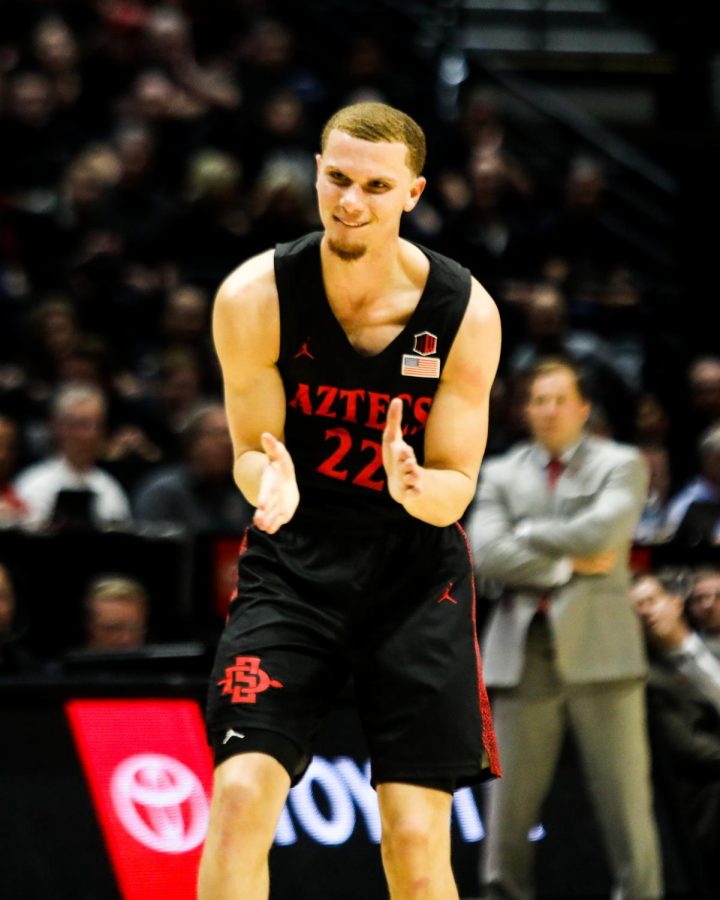 Junior guard Malachi Flynn claps his hands after a play during the Aztecs' 66-63 loss to UNLV on Feb. 22 at Viejas Arena.

LAS VEGAS – Wednesday marked the opening of the men’s basketball Mountain West Conference tournament at the Thomas and Mack Center on the campus of the University of Nevada, Las Vegas.

The first game was between the No. 8 seed Fresno State and No. 9 Air Force, where the Falcons were victorious by a final score of 77-70 over the Bulldogs.

The Falcons kept their season alive for one more day but have a challenge in front of them tomorrow by having to face No. 1 seeded San Diego State.

Falcons’ thoughts on playing against the Aztecs

The Falcons have never won a quarterfinal game in their tournament history.

On Thursday, they’ll have an opportunity to make program history, but the Aztecs stand in their way.

“If that group’s not motivated and excited about playing a quarterfinal of the Mountain West, which we’ve never advanced past, and playing a top-five team in the country, then we’ve got the wrong group of guys,” Pilipovich said. “We’re going to be ready to go.”

The Aztecs are coming into the tournament as a well rested bunch compared to their conference counterparts.

They haven’t played since Feb. 29 when they earned a road win against Nevada to close out the regular season.

They finished with the best record in conference play history at 17-1.

“Coach Dutcher has done a great job with them. Malachi Flynn was Player of the Year in the conference, and they’re talented,” Plipovich said. “They can space you, shoot it and score. They defend as one of the best teams in the country. We only have one film to watch because we’ve only played them once this year.”

In their lone meeting during the regular season, the Aztecs won 89-74 in Colorado.

“They’re definitely a good team, but like I said before, they put their shoes on like we put our shoes on,” Scottie said. “If we keep that focus, intensity and effort that we had tonight and learn from our mistakes, you never know. Anything could happen tomorrow.”

Here are three things to know about Air Force.

Falcons are strong, scrappy defensive team that can create mishaps

Air Force had their way picking apart and disrupting the Bulldogs’ offense Wednesday.

The Falcons created 15 turnovers and quickly took advantage on the other side of the floor, scoring 14 points off those Bulldog mistakes.

“I think the defensive effort came from just high energy, leaving it all on the floor, us just playing for each other,” Falcons senior forward Lavelle Scottie said after the win over Fresno State. “We did a great job focusing on our defensive report and that led us to giving it our all on the defensive end.”

Air Force was slightly better than its regular season average of forcing turnovers with 11.5 turnovers forced per game.

The Falcons were able to rack up steals against the Bulldogs.

Even though they ranked dead last in the conference in steals, the Falcons picked Fresno State’s pockets eight times, including five before halftime.

“The activity on the defensive end really helped us, just having fun out there,” Falcons sophomore guard A.J. Walker said. “When we’re getting steals, getting out on the run it was like we were playing in high school. It was fun.”

Falcons can do some damage inside

Air Force matched up relatively smaller in size compared to the Bulldogs but were able to capitalize more inside the paint.

The Falcons scored 30 of their 77 total points inside the paint.

“We talked about moving the ball around a lot, getting the zone to move,” Scottie said. “Once we got the zone to move, the holes would start to open up and we would flash in the high post and look opposite, kick opposite.”

While finding their rhythm inside, Air Force defensively as a unit took that away from Fresno State.

The Bulldogs scored 10 points in the paint, their lowest as a team all year. The previous low was 12 points against Utah State during the regular season back on Feb. 15.

Fresno State averaged 25.4 points inside during the regular season.

Air Force is a team that likes to come out fast

Falcons really do like to fly – on the court that is.

Air Force is a team that likes to play at a high pace and use it to its advantage.

The Bulldogs often found themselves having to quickly set their defense or face getting caught in transition.

Air Force did so multiple times throughout the game, good for 14 fastbreak points compared to Fresno State’s two.

“We want to push tempo. We set some records this year for offensive efficiency for our team,” Pilipovich said. “At times we wanted to attack the score and I thought we were able to find out when to go and when to whoa, as they say. I thought we did a pretty good job of that.”