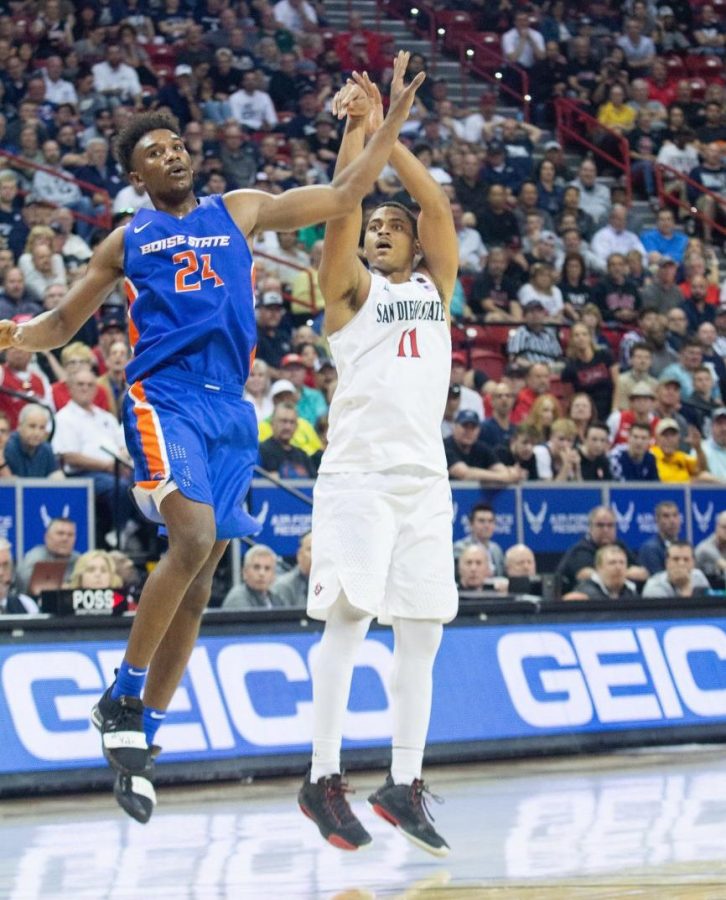 Aztecs junior forward Matt Mitchell fires a 3-pointer over a Boise State defender during a 81-68 SDSU win on March 6 at the Thomas and Mack Center in Las Vegas.

For the fourth straight game, the Aztecs (30-1, 17-1 MWC) allowed their opponent to shoot over 50% in the first half. In the case of Friday, they were down as much as 16 but used a 19-3 run to tie the game before the first half buzzer – part in thanks to a contested 3-pointer by junior guard Jordan Schakel.

Similar to Thursday’s quarterfinal, the Aztec defense stepped up in the second half to allow the Broncos (20-12, 11-7)  to only shoot 23%.

With the win, the Aztecs advance to the tournament title game for the sixth time in the last seven years and 10 of the last 12.

SDSU will now have a chance to avenge its loss in last year’s title game with a rematch against Utah State Saturday at 2:30 p.m.

Here are three observations from SDSU’s win over Boise State.

1. Backcourt duo of Flynn and Feagin combine for 43

For someone who is averaging 17.5 points per game, scoring 22 shouldn’t be much of a surprise for Aztecs junior guard Malachi Flynn who added five rebounds and five assists.

But for senior guard KJ Feagin, it was his highest point total since he dropped 21 at Air Force about a month ago.

Feagin said Friday felt like the time he scored his highest point total in an Aztec uniform with 23 against Boise almost two months ago in Viejas Arena.

“Today definitely felt like our game against Boise at Viejas,” Feagin said. “I got going in that game. And in this game, I got going early as well, and I didn’t slow down.”

The starting backcourt of those two combined for 43 points on 15-of-28 shooting and 9-of-19 from 3-point range.

The Aztecs were a bit 3-happy in the first half, likely because they know they can make a lot of them.

They hit 10 of their 20 shots from behind the arc, only attempting six shots that would’ve counted for two.

Dutcher said the Aztecs were almost dared to shoot from the outside.

“They weren’t going to give us anything but threes,” Dutcher said. “There was no room to the basket. They were packed (inside), and so we took some threes… But at some point, we have to make threes in order to stretch the floor.”

Feagin made five and Flynn made four, along with three each from Schakel and junior forward Matt Mitchell.

“To the credit of our guys, they made a lot of threes,” Dutcher said. “That’s what they were giving us; that’s what we had to take.”

3. Aztecs trail as much as 16 but storm back late to tie game in first half

Well, this time they weren’t trailing at halftime like they have in the past four contests.

They weren’t leading either.

After trailing by 16 with 4:56 left, the Aztecs went on a 19-3 run to end the half. The 16-point deficit matched their largest deficit of the season, dating back to the Iowa win back in November.

In the final five minutes, the Aztecs combined to make five 3-pointers: Flynn made two, Feagin made one and Schakel made a contested one as time expired.

Aztecs tied it up at 40 heading into the locker room.

At that point, Flynn led SDSU with 11 points, and Feagin was right behind at 10 points – both shot 4-for-7 from the field and were the only Aztecs to reach double-digits in the half.

Feagin said once SDSU tied it up before halftime, he knew the team was going to win.

“The 19-3 run in the first half was a big momentum boost for us,” Feagin said. “After we tied it at halftime, you guys saw how pumped up we were at halftime, and I knew that we weren’t going to lose after that.”

Aside from the late hot streak, SDSU was cold for the majority of the first half. At the 8:19 mark, Boise State was shooting 68% from the field while the Aztecs were at 35%.