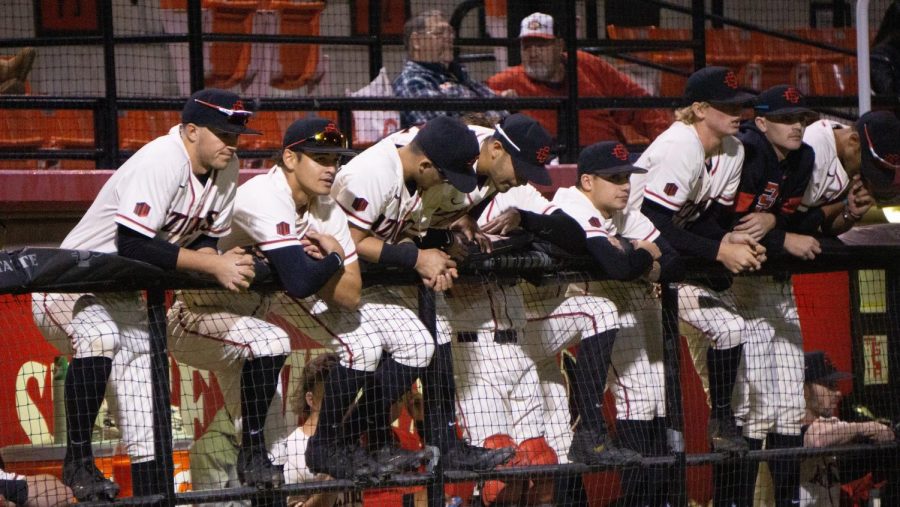 San Diego State baseball players look towards the field from the dugout during the Aztecs' 4-1 win over Iowa on Feb. 21, 2020 at Tony Gwynn Stadium.

Eligibility relief will be provided by the NCAA for spring student-athletes who had their season canceled as part of precautions taken amid the outbreak of the coronavirus, the NCAA announced Friday.

“Council leadership agreed that eligibility relief is appropriate for all Division I student-athletes who participated in spring sports,” a statement by the NCAA said.

The waiver could provide San Diego State baseball players another year of eligibility after their season was canceled Thursday morning.

“I definitely think it’s the right thing to do,” he said. “Seniors should be given the opportunity to come back and have another go if they want.”

Jarvis, a transfer from Saddleback College, joined SDSU baseball as a junior in 2019 and earned second team all-Mountain West honors.

His 2020 season ended after posting a .273 batting average with two home runs and seven RBIs as the everyday leadoff hitter for the Aztecs (10-6).

Despite the chance of getting another year of eligibility, the opportunity creates a dilemma for seniors like Jarvis.

Jarvis said the time investment in being a student-athlete — added with the factors that come with being a graduating senior — could make some feel ready to move on from collegiate sports.

“As for me, it’s nice to have that as an option, but I don’t know whether I’d take the extra year or not. It will take some time to get a better idea of how it will play out,” Jarvis said in a message.

The extra year could also change the dynamic between NCAA Division I baseball and those who are MLB prospects.

Sophomore pitcher and designated hitter Brian Leonhardt (0-0, 2.08 ERA) said the waiver could make the 2021 season different from years past.

“It’s an interesting topic because everyone will be one year older and stronger and more mature,” Leonhardt told The Daily Aztec. “All teams will be a lot stronger, and it will also open up advantages for the MLB draft prospects having the advantage of another year,”.

The Aztecs were off to a promising start to the season and were preseason favorites to win the Mountain West Conference.

Sophomore pitcher Aaron Eden (0-1, 5.79 ERA) said in a message the news was heartbreaking.

“When I heard the season was canceled I was devastated just because I knew we were going to go on a special run to a great season to do something special,” Eden said.

Sophomore pitcher Michael Paredes (1-1, 4.05 ERA) was awarded the MWC Pitcher of the Week on March 9 after five innings of two-run ball against then No. 11/15 Oklahoma prior to the season cancelation on Thursday.

He said in a message the added year of eligibility provides SDSU the chance return with much of the same core.

“I think this is extremely important for our team and our seniors that will be eligible to come back next year,” Paredes said. “We know that we have one of the best groups ever at SDSU this year and for us to get another chance next year with the same guys is huge for us as a program.”