Opinion: Health should be our main concern, not productivity 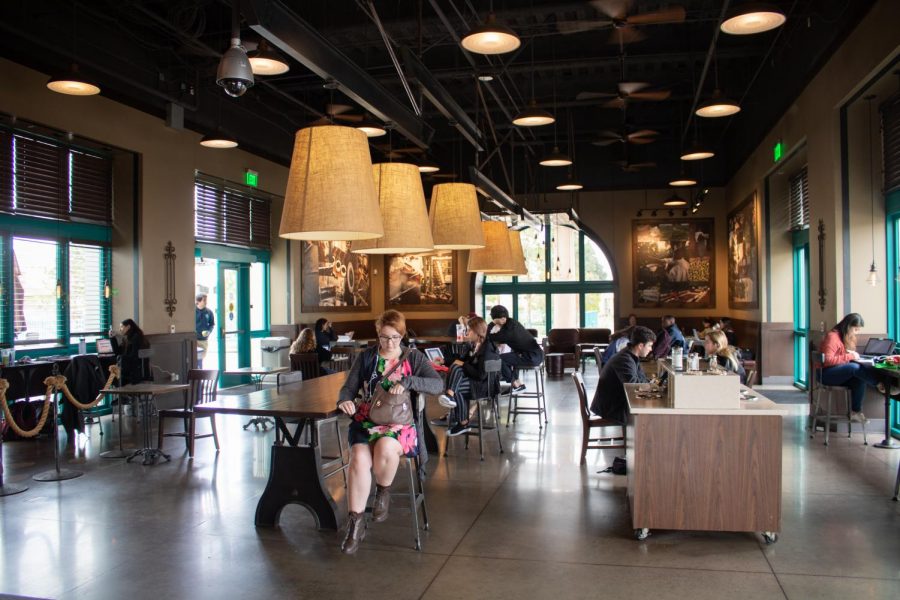 Just a few days before SDSU shut down most campus operations, students practiced social distancing at the Starbucks in the student union. The location had about half the tables it normally would in an attempt to prevent the spread of COVID-19.

Before the entire planet was concerned about a widespread viral pandemic, I could show up to class with a stuffy nose, headache and cough and be fine. In fact, it was expected of me. Or at least it felt like it was.

Western culture has an unhealthy obsession with productivity. The rise of COVID-19 has illuminated the issues in both American work culture and the American healthcare system.

Growing up, I never went to the doctor’s office for a cold. Colds go away on their own. Why should I pay a copay to have some doctor tell me to take some over-the-counter medication I would have taken anyway?

When I was younger, I was too stubborn to let a cold stop me from going to class or sports practice. I was afraid life would go on regardless of whether I was healthy. I was conditioned to think that letting myself rest was a sign of weakness and that I would be perceived as lazy or dramatic for doing so.

But it’s noble to push through stuff like that, right?

Ever since I got to college, it’s felt like the stakes are much higher. Catching up after missing a few days of lecture isn’t comparable to high school.

I had an exam scheduled for March 11. In the days leading up to the exam, the student body had already received several emails regarding travel restrictions, online instruction and event cancellations. It felt like everything was changing by the hour.

On March 10, my biology professor posted an announcement on Blackboard: “If you are sick, please do not come to the exam, even if you have a mild flu.”

A part of me was relieved. I felt fine. I just had something in my chest, a feeling that a nice cough was marinating inside of me, but it was nothing I couldn’t handle with the help of a daytime cold medicine and my usual multi-vitamin.

I must admit I wanted to miss out mostly because I felt super underprepared for the exam. However, on the other hand, I was genuinely worried I wouldn’t be able to stifle a cough or hide my labored breathing if I needed to. Everyone in the lecture hall would think that I’m that sick jerk who thinks I’m special enough to take my test at the expense of everyone else, and they’d have a good reason to judge me. I felt uneasy at the thought of myself coughing into my elbow and resting my arm on a seat that some stranger would fill next. Or the thought of taking a test for an hour while within inches of another person.

Going to my exam just didn’t feel like the right thing to do.

After a year and a half of living in the residence halls, combined with a poor diet and inconsistent sleep schedule, I had been sick many times before. But this was the first time I had ever even thought of trying to get a doctor’s note.

After a few minutes of dealing with the nice automated voice on the phone, the line finally led me to a message stating I needed a mail extension code — whatever that means. Okay, better try again.

I called the Calpulli Center. The number was invalid.

There I was: two hours before a test I didn’t want to take in a filled lecture hall I knew I shouldn’t be in, and I couldn’t get my doctor’s note to be excused. I emailed my instructor about my dilemma, but it was such short notice that I couldn’t blame her for not replying.

I ended up going to the exam.

I still don’t know if that was the right choice, but I realized then and there how American culture and an emphasis on productivity has failed us. It’s been ingrained in me that staying on top of work and school is bigger than me — bigger than my mental health, bigger than my emotional wellness and bigger than my own health and the health of the people around me.

I know it’s not true, but it’s the way I think and behave. That’s why I go to class with the cold to get five measly Clicker points, or why I go to my midterm with a nose full of boogers and a slight fever.

The working class should not be at a greater health risk because they are unable to take sick days off. Students should not be at odds with instructors who are not willing to acknowledge the importance of their students’ health. People should not be discouraged from visiting the doctor when they need to due to a lack of access or fear of associated costs.

These problems have existed for a long time, but in the presence of a heightened threat of viral disease, they will only be exacerbated. A culture that is adverse to social distancing and receiving proper care in combination with an easily overwhelmed health system does not make this country well adept to face a rising pandemic.

The inconvenience of taking preventive measures for the majority of students and faculty at San Diego State is merely that: an inconvenience. We must keep in mind that for the thousands of people in the vulnerable minority, practices like social distancing and self-imposed quarantine are the difference between life and death.

“The idea of preventive medicine is faintly un-American. It means, first, recognizing that the enemy is us.”