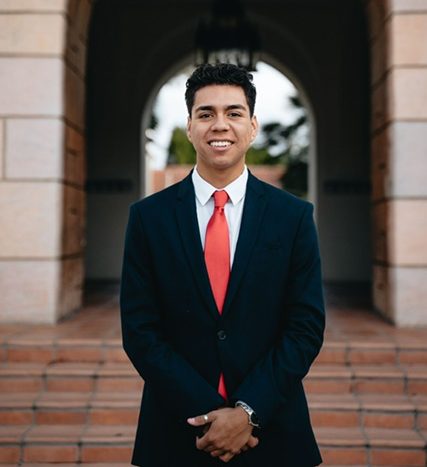 Why do you want to run for Executive Vice President?

“First and foremost, I love San Diego State University. I originally got on to campus, it’s kind of been a home to me. I found my community within Associated Students my first year, and then it opened so many more opportunities in other organizations for me to get involved with Rotaract and things like that. It just gave me that sense of belonging, and now I’ve been involved with Associated Students for three years.

“I’m running for this position now because I want to pay it forward. I feel like it’s given me so much, and I want to give back to the organization that kind of fulfilled my entire SDSU experience. Doing so, I want to do that to get into a couple of goals that I have. Ever since I’ve got here my freshman year, it’s kind of been life-changing almost and it’s opened so many opportunities. I really value service, and I feel like Associated Students has allowed me to serve San Diego State University.”

“I’ve been involved with Associated Students all three years that I’ve been here. I’ve been a part of the Aztec Student Union Board for three years, first as a designee for the executive vice president and then the past two years as chair. One as an Aztec Pride chair and this year as chair of Student Team Competitions. The role of executive vice president is to sit on the Greenfest Executive Board and to chair homecoming, and this year I’ve had the opportunity to be a part of both. I’ve sat on the Greenfest Executive Board and have also been on the planning committee for homecoming. I’ve also been a justice on the judicial affairs council within Associated Students, so I not only know how the programming side works of A.S., but also how the behind the scenes and how student leaders are being held accountable.

“Outside of Associated Students, I have the privilege of being the president of Rotaract at SDSU. I was the Vice President of Public Relations for Rotaract last year. I have been on the dance marathon leadership team. I’ve been a member of Camp Kesem. I was on the founding board of Tijuana Home Build last year, the first year. Also, my first year at San Diego State University I was a part of the first-gen ‘FLI,’ which is a part of the First-Year Leadership Initiative, where they are mentored by an A.S. leader and learn about how A.S. works. I’ve been on the Rock the Vote leadership team and the Aztecs Rock Hunger leadership team.

“So, I think I definitely have a great understanding of how Associated Students works, the role of executive vice president and the overall campus community, and how things work in and out.”

“My team and I are running on the ideas of reevaluate, redefine and reinforce. For me specifically, I want to reevaluate mental health services and make sure it is a top priority. I want to do that by making sure that students are aware of the resources that they have accessible to them, whether that’s through more consistent programming of counseling and psychological services (or) possibly getting resources on the back of student IDs. I think now we have emergency services on the back of Red IDs, but I think we need to add counseling and psychological services or emergency services that students need if they’re having mental health issues and they need direct help. I want to redefine the importance of sustainability on campus, and what that looks like is working towards complete carbon neutrality by 2030 and implementing a chief sustainability officer in the president’s office. And then, finally, I want to redefine SDSU pride. I want to create a platform for cross-campus collaboration to be possible from all different organizations.”

“I’d say the diversity and possibilities. I think there are so many opportunities out there for students to take advantage of, and I think SDSU does a great job of doing so. I think where there’s lack is students knowing it. I think a lot of students don’t know about certain things if their friends haven’t done it or if their friends don’t tell them about it, because I think SDSU doesn’t do a great job publicizing, but I think there are so many opportunities that the university offers that make SDSU one of a kind.”