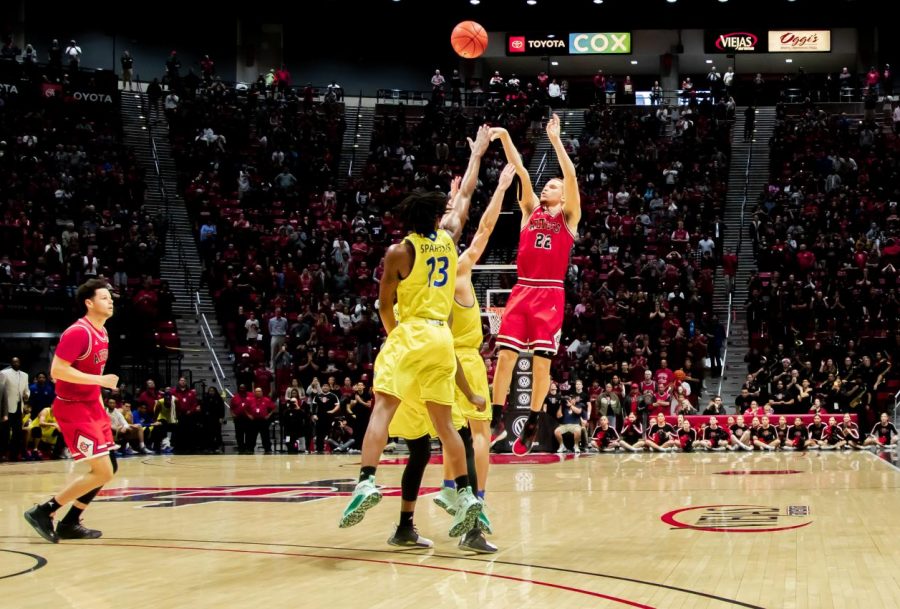 Then-junior guard Malachi Flynn hits a game-winning 3-pointer to give the Aztecs a 59-57 victory over San José State on Dec. 8, 2019 at Viejas Arena. “The Shot” preserved the Aztecs’ undefeated record and improved the team to 10-0.

San Diego State men’s basketball defeated San José State in a last-second 59-57 win on Dec. 8 at Viejas Arena. The Aztecs (10-0, 2-0 Mountain West Conference) led by as many as 13 points in the first half, but a second half rally from the Spartans (4-6, 0-2 MWC) tested the Scarlet and Black. A last-second basket from junior guard Malachi Flynn gave SDSU its tenth straight win.

5.7 seconds left, and the Aztecs inbound from the baseline.

Junior guard Jordan Schakel got the inbound pass in the left corner and was immediately double-teamed.

His only option? Flynn.

With just over two second left in the game, Flynn got the pass and had to shoot a long 3-pointer.

“I just knew I had space to get it off and I let it go,” Flynn said.

It surely didn’t seem like it, as Flynn shot the ball over three defenders while falling to his left.

Somehow, the ball found its way into the basket to give the Aztecs a 59-57 lead with 0.9 seconds left.

That shot would preserve the team’s undefeated record.

“I’ve hit a couple tough shots to end games, but this one was huge,” Flynn said. “This has been the best one yet because right now we’re still undefeated, so that was big.”

Head coach Brian Dutcher said the inbounds play was designed to have Schakel take the last shot, but SJSU gave the Aztecs a different look on defense.

“That was the first time they zoned the baseline out of bounds all game,” Dutcher said. “They did a great job of doubling Jordan… He let the guy that takes impossible shots get the ball and he made one.”

Twelve points – all after halftime.

Three blocks and a steal on the defensive end.

Sophomore forward Nathan Mensah was a force for the Aztecs on both sides of the ball in the second half.

He also tallied seven offensive rebounds (10 total in the second half) and made three second-chance shots.

“That’s just what he does,” Mitchell said of Mensah. “He came out in the second half and he came out hard. He played to his level, so kudos to him and hopefully he can do that the rest of the season.”

Despite Mensah collecting two fouls early, Dutcher said he decided to keep him in the game because of depth from senior forward Yanni Wetzell and sophomore forward Joel Mensah.

“Nathan was great on the glass,” Dutcher said. “Two hands on the back, and all of a sudden he’s got two fouls early. We played him in the first half with two fouls, sometimes we don’t do that. But we had him in there because of our depth.”

In the second half, the Aztecs were unable to make a field goal for over seven minutes.

SDSU entered the contest scoring 38.5 points per half but were held to 30 in the first half and 29 in the second.

The Aztecs only made one out of its last seven shots – with Flynn’s game-winner being the only shot made.

But Flynn wasn’t the only starter who had a below-average shooting performance. Senior guard KJ Feagin was only able to make one out of 10 shots.

Junior forward Matt Mitchell said the Aztecs were fortunate to have escaped with a win.

“This was definitely a game that could’ve gotten away from us,” Mitchell said. “I think we’ve got to take this as a teaching lesson and say we can’t tip-toe in the first half and even to start the second half.”