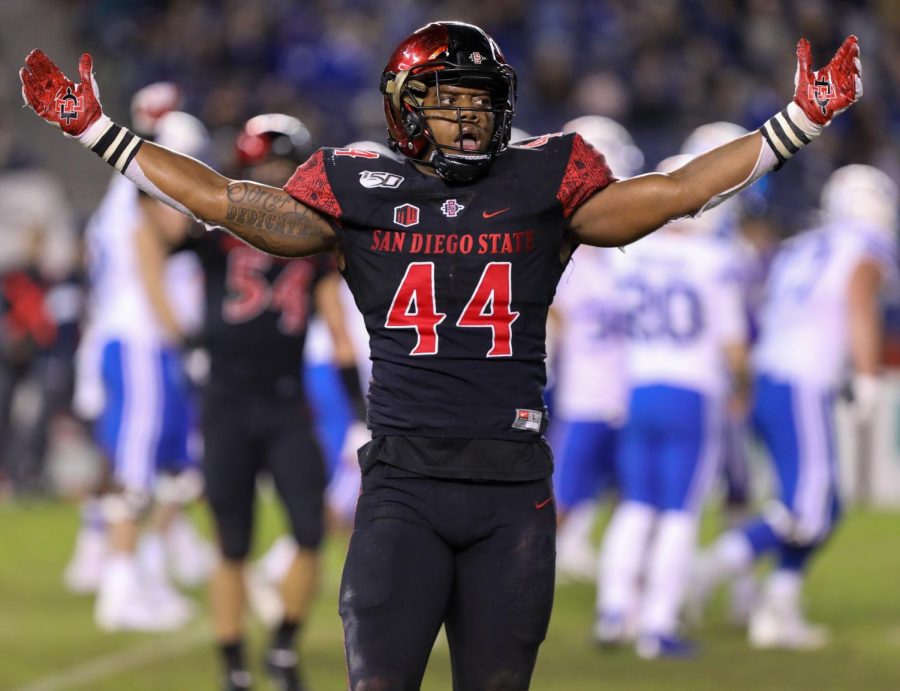 Senior linebacker Kyahva Tezino reacts after a play during the Aztecs’ 13-3 victory over BYU on Nov. 30

Fifteen San Diego State football seniors were honored during the team’s 13-3 victory over BYU on Nov. 30 at SDCCU Stadium. Those seniors will, especially with a win on Senior Night, remember this final game on their home field.

Head coach Rocky Long described this senior class as one that took a leadership role, while some players said this group of seniors were “tight-knit” as defensive lineman Myles Cheatum said and “bought in” as tight end Parker Houston said.

Long said this class stepped up to make sure the team finished strong this season, following last season’s late-season collapse.

“I’m really proud of the senior class because I think they took a leadership role. I think toward the end of last season, we did not play the same way we normally play,” Long said. “In the offseason, we re-established what this program is all about, and it doesn’t happen unless your leadership buys in. And this senior class bought in.

“They’ve made a huge difference. Good, bad or in between, they’ve always had the right attitude about it and it’s been team-first, so this senior class has done a great job.”

The Daily Aztec spoke with six of those seniors to find out some memories that stood out to them during their four years at the Mesa.

Quarterbacks are ultimately judged by their ability to win games for their respective teams.

Fair or not, wins are the expectation placed upon the shoulders of the signal-caller. Passing yards, touchdowns and completion percentage are often overlooked when there’s not a “W” by the final scoreboard.

SDSU’s Ryan Agnew is more interested in putting up wins more than statistics.

“I want to be remembered as a winner,” Agnew said. “We come in here 9-3 with a chance to have 10 wins. In San Diego State history, there has been only 10 other teams to do that, so we’ll be the 11th team. It’ll be really special to go down as one of the great teams.”

With a career 15-4 (.778) record as a starter, Agnew’s winning percentage is the highest in program history of any quarterback with at least 15 starts.

It was only fitting Agnew chose his favorite game as an Aztec in not only a win but one he played a major part in.

Agnew led SDSU to a game-winning drive that ended on a 12-yard touchdown pass to sophomore tight end Daniel Bellinger.

The play broke down, and Agnew had to work some magic even if that meant making risky decisions.

“I ran left. The whole thing is when you run you run left, never throw across your body,” Agnew told The Daily Aztec two months later reflecting on the play. “I did the worst thing and to the middle of the field, in the red zone. Bad idea, but it worked out great.”

If you ask the seniors who would cry first after the final home game, there seemed to be a clear consensus: Kyahva Tezino.

Selected as a team captain by his fellow teammates, Tezino is the emotional leader of this team. It shouldn’t come to any surprise Tezino will be the one to shed a tear first.

“Not to dock (Tezino), but he just plays with so much emotion,” senior tight end Parker Houston said. “He’s the one who’s getting us pumped up before the game. He’s the one who breaks the (huddle). He’s always energized on the sidelines. You bottle it up right and at some point, it’s got to come out.”

Tezino’s reaction to his teammates saying he will be the first to cry?

“That’s probably fair. I’ll probably cry,” he told The Daily Aztec. “It’s the emotion that of me finally leaving this program. I feel like I’ve only been here two days, but it’s been five years. Just the relationships I’ve built here and just the fun I’ve had with my teammates. It’s going to be hard to replace it.”

Tezino has been at SDSU a year longer than some of these other seniors since he redshirted during the 2015 season.

There’s a long list of memories he has made during his time here. Here is a snapshot of his favorites.

Favorite moment(s) at SDCCU: “I would say best moment would be Stanford probably because everybody rushed the field, and that’s just something I never saw in college. For me being a part of that was great. Two, us beating ASU. And I would say all the plays me making to seal the game and stuff like that. Those were probably the best memories I’m always going to have. Hopefully, I can get footage of that, so I can show my kids (one day).”

Favorite moment at a road game: “Last year against Boise State I mean that stadium is crazy. It was just fun too – there’s probably a clip of it – I got a sack of Brett Rypien, and I went to the crowd and put my hand up like ‘are you entertained’ like in the movie ‘Gladiator’ … that’s what I thought in my head at the time.”

Despite tight end Parker Houston being one of the seniors predicting Tezino will be the first to cry, Houston was emotional himself following the win over BYU.

Houston didn’t shed a tear, but it was clear his eyes started to water up talking about things he did for the final time at SDCCU Stadium.

“A lot of emotions walking out that tunnel before the game. After we sang the fight song, I just looked back at everything one last time and soaked it all in,” he said.

Favorite moment: “Winning the “Old Oil Can” back is pretty tough to beat, but I think when (David) Wells stretched over the goal line to beat Stanford at home. That’s probably one of my favorites. When we beat Cal in 2016, it was cool. It was awesome. But we didn’t play in the game and we didn’t have an effect. It kind of just passes by you. But that Stanford one, that will resonate with me forever. Just seeing everybody storm the field and taking pictures with fans. It was a lot of fun.”

It’s not often a football player takes directly what he learned in the classroom and applies it in a real situation on the field.

For defensive lineman Myles Cheatum, not only did he apply what he learned from a class to a football game, but that also happened to be his favorite memory at SDSU.

Like many of his peers, Cheatum said his favorite game at SDCCU Stadium was the Stanford game back in 2017.

However, there was a special moment that he experienced personally.

Cheatum took an American Sign Language class and has learned to become proficient using it. Little did he know, Cheatum had a chance to put his sign language to good use.

After fans rushed the field following the Aztecs upset over Stanford, a person who cannot hear asked Cheatum for a picture and turned out to be his most memorable moment in that stadium.

“Stanford game, definitely. When the lights went out, that was crazy. Everyone had their phones out (and) lit up there. It was like we were at a concert,” Cheatum said. “Then afterwards, actually that semester, I had been taking a sign language class, and someone ran on the field and they were not speaking and they signed to me.

“They wanted to take a picture with me and it was the weirdest thing to see something translate from the classroom to the field that you would never expect to happen. So I signed back to him that I was studying at SDSU and he got really excited … That’s probably one of the one things I really truly cherish from that game.”

Since most of the seniors said the Stanford upset in 2017 was their favorite game, it’s refreshing to hear a different answer.

For senior running back Juwan Washington, the 2015 Mountain West Championship against Air Force at home was his favorite game, which was a game as a redshirt he didn’t play in.

He said that might’ve been the loudest he has heard SDCCU Stadium.

“The best game – I wasn’t playing but I was here – (was) when we played the championship game against Air Force at home,” Washington said. “I think that was probably the loudest I heard. It was just a good home atmosphere to be able to run on the field when we won.”

“It’s going to be crazy because how fast it all went,” Washington said. “I remember just first coming in and watching all the senior days before us. Then, realizing now the seniors, they’re talking about me and all the other guys. It’s crazy.” 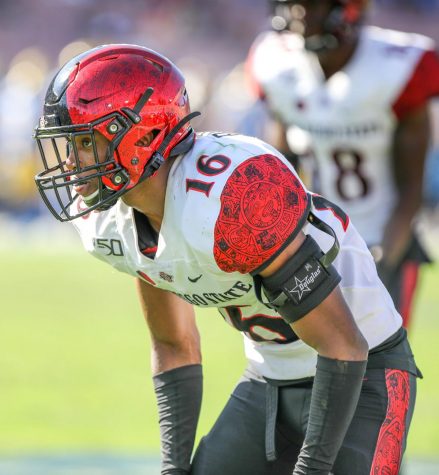 When a defensive back has three interceptions in one game, it’s hard to find a game you would enjoy more.

Cornerback Luq Barcoo had those three picks against Colorado State on Oct. 5, which he said was his favorite game in his two seasons as an Aztec.

The Grossmont College transfer notched those three interceptions on consecutive plays – the first FBS player to do so since 2012.

That ranks tied for first in the nation.

Barcoo’s season led to an Associated Press Third-Team All-American selection – the first Aztec defensive back to ever land on any AP team.

“When the season is over, when it’s all said and done,” Barcoo said before the BYU game of enjoying the accolades. “The reason why I haven’t really reflected on it because I plan on getting more as much as I can. If I know exactly how much I’m going to finish with, I’ll be more excited about it then.”

Now, he’ll have time to reflect on his record-setting season.