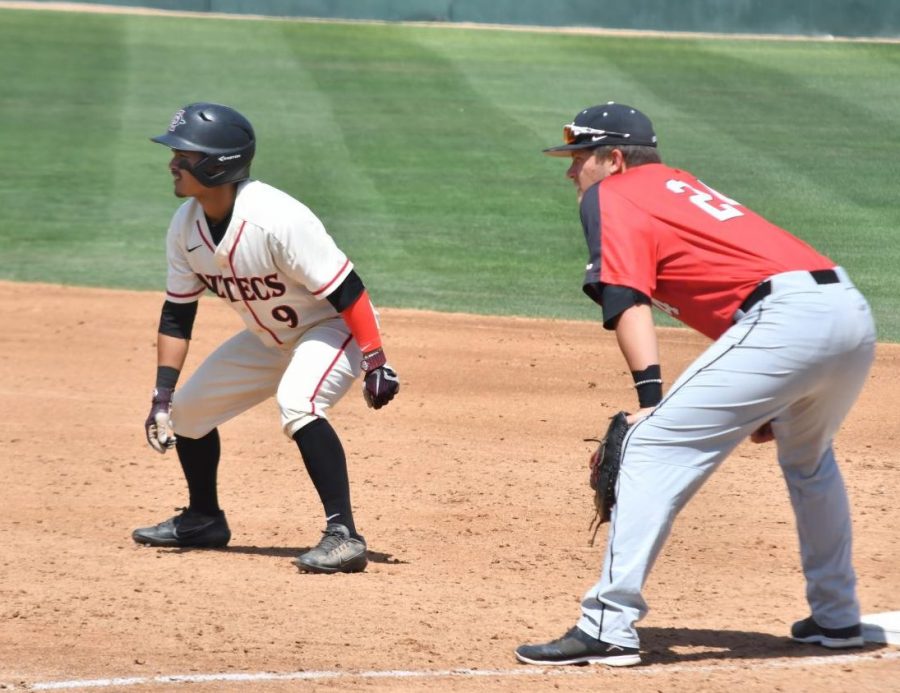 Then-sophomore outfielder Matt Rudick prepares for a potential pickoff play by the opposing pitcher during the 2019 season.

Aztec baseball beat writer roundtable: What to watch for in 2020

San Diego State baseball opened its 2020 campaign Friday with a 7-5 victory over the ACC’s Virginia Tech at the Coastal Carolina Invitational in South Carolina. The Aztecs came back from a 4-0 deficit to defeat the Hokies.

Here are three things to look out for in the 2020 season – each by our three beat writers.

Sophomore outfielder Jaden Fein returns to Tony Gwynn Stadium this season after being named the 2019 Mountain West Co-Freshman of the Year.

Fein is the first Aztec to receive this title since former San Diego State pitcher Stephen Strasburg in 2007.

“It’s a huge honor for me,” Fein said. “I couldn’t do it without my teammates and coaches, and the Aztec family around me.”

“He’s an exceptionally talented kid,” Martinez said. “He can do a lot of different things on the baseball field. He can run, he can throw, he can hit.”

Fein plans on using this award as a stepping stone for both himself and the squad.

“Using that (accolade), motivating myself, helping my teammates grow and winning games together as a team,” Fein said.

Despite his previous success, growth and progression will be an important part of Fein’s upcoming season.

“This is a big year for him, for his strength to catch up with his talent level,” Martinez said. “The biggest thing is that he has to continue to physically mature in order for him to break through.”

This process of equalizing strength with skill has already begun.

Preseason has yielded improvement in this area for Fein, and Martinez is looking forward to what the upcoming season has in store for his Co-Freshman of the Year.

“He’s been gaining (strength) throughout the fall, so I’m excited to watch how that translates into real time when we start playing this spring,” Martinez said.

Guerrero: SDSU’s non-conference schedule and how it can help build an at-large résumé for an NCAA regional

Outside of the MWC slate of opponents, SDSU will face a number of non-conference teams, including programs that belong to Power 5 conferences.

The tests against schools like Oklahoma, TCU and Oregon State can also build SDSU’s résumé as an at-large bid if the Aztecs fail to earn an automatic bid by winning the conference tournament.

Some of the non-conference opponents they will face are familiar opponents from last season including Oregon State and Cal State Fullerton who the Aztecs went 3-2 on the road against in 2019 with two wins coming against CSUF and one against OSU.

Southern California and the Big 12’s TCU are new opponents the Aztecs will take on this season.

The Aztecs’ first test of the season against non-conference teams will begin in the Coastal Carolina tournament against Virginia Tech (in which SDSU won 7-5), UNC Greensboro and 2016 College World Series champion Coastal Carolina.

“If we play good out there, then we’re going to get our name out there as a top team in the country,” he said. “That’s what we’re trying to do. We’re trying to go to Omaha and have a name for ourselves.”

Martinez said the Coastal Carolina tournament also gives the Aztecs a chance to get a feel for what a regional could feel like.

“It’s going to be a very difficult trip,” Martinez said. “We’re trying to get them uncomfortable and kind of simulate if we happen to get to a regional and kind of the same type of atmosphere. So, we have trained them at the front end of the season for hopefully what happens at the back end.”

Last season, the Aztec pitching staff got hit hard by the injury bug.

Pitchers such as Harrison Pyatt, Brag Wegman and Logan Boyer got hit with injuries that forced SDSU to adapt and work with what they had.

While SDSU returns sophomores Aaron Eden and Michael Paredes, who stepped up in the absence of the aforementioned pitchers, there is new pitcher Aztecs fans should look out for this season.

Freshman TJ Fondtain could be someone that can be a big contributor on the Mesa.

The left-hander out of Clovis, California earned a 17-2 record in 31 career pitching appearances, while posting a 1.95 ERA in 133 innings pitched.

Returners like Eden and Paredes will look to lead the way for the Aztecs’ pitching staff.

“Mainly just staying within myself, just come out here every day and get better,” Eden said. “Do a lot of film work, just a lot of repetition of everything that I do every day, so I can be ready to go when it’s game time.”

If returning pitchers can build off what they did last year and freshmen live up to their expectations, this pitching staff could be on the way to a very good year.