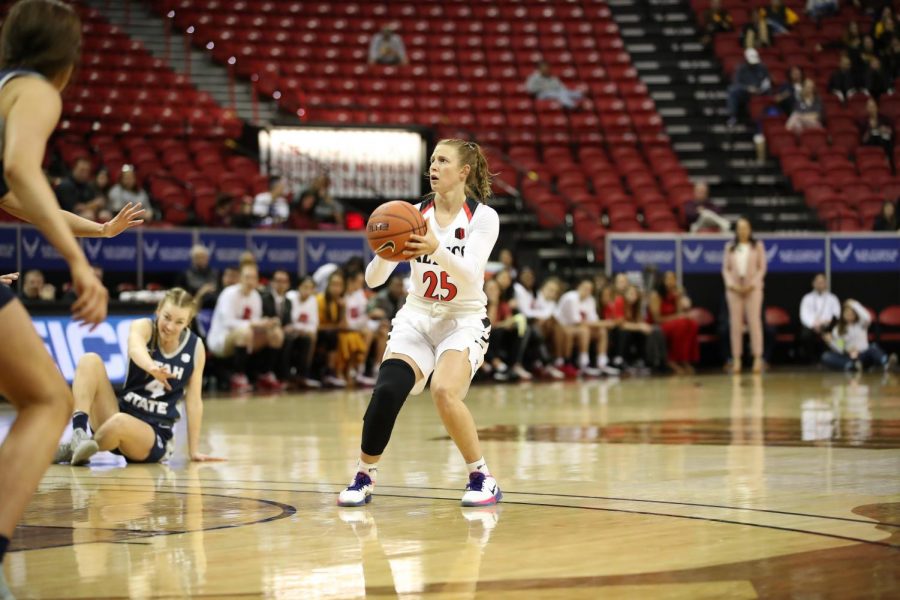 Senior guard Taylor Kalmer looks to pull up for a jumper during the Aztecs against Utah State on March 1 in the first round of the 2020 Mountain West Championships in Thomas and Mack Center in Las Vegas.

LAS VEGAS — San Diego State women’s basketball fell 81-79 against the Utah State Aggies in the first round of the Mountain West Conference tournament on March 1 at the Thomas and Mack Center.

The Scarlet and Black showed some fight and propelled their way back after being down by as much as 15.

SDSU (14-17) forced the game into overtime, but the Aggies (8-22) pulled away after forward Hailey Bassett made a jumper from 10 feet out with two seconds left.

“This one really hurt,” head coach Stacie Terry-Hutson said. “I thought both teams played extremely hard, obviously wanting to get the victory, to survive and advance. It was a back and forth game, a good college basketball game. I thought our kids showed a lot of grit.”

It was the first overtime game of the tournament. The Aggies became the first No. 11 seed in MWC tournament history to win a game.

The Aztecs started the game by missing 12 of their opening 14 attempts from the floor.

It wasn’t until the four-minute mark when SDSU sunk its first basket courtesy of a 3-pointer from sophomore guard Sophia Ramos.

The troubled start on offense wasn’t just limited to the Aztecs either. Utah State was only able to shoot 3-of-12 from the field.

“I think it might have been a little bit of nerves for both teams,” sophomore guard Sophia Ramos said. “We had the late game, so we’re staying in the hotel all day and were anxious to just go out and play. It just looks like it hurt us a little more at the beginning than (Utah State).”

The free throw line is where most of the points came from.

Both teams combined for 15-18 from the line. The Aztecs made nine of their 10 attempts at the charity strike in the first quarter.

Despite the struggling offense displayed by both teams, the score managed to be tied at 14 after one period.

Heading into this game, Terry-Hutson mentioned that the Aggies were a team to watch out for from 3-point range.

During the regular season, Utah State ranked eighth in the conference in perimeter shooting by averaging five makes per game.

Terry-Hutson wasn’t wrong in her assessment in spite of what the statistics say.

“I didn’t think we did a good job of taking away the three-point line tonight,” Terry-Hutson said. “We did some uncharacteristic things tonight and when we go back and watch this, they’ll see we made too many errors to come out on top.”

By halftime, the Aggies had already made six of their 13 shots from beyond the arc.

The second half continued to see long range shots from Utah State.

Five of them came in the last two quarters, totaling 11 made 3s in the game for the Aggies.

3. SDSU outrebounds Aggies, get contributions from the bench

The depth, size and length proved to be a viable asset for the Aztecs against the Aggies.

The Aztecs outrebounded Utah State 49-36 for the game.

“Rebounding has been an emphasis this whole season,” sophomore guard Kennedi Villa said. “We watch a lot of film on rebounding and when we see ourselves not rebounding, it’s pretty embarrassing.”

SDSU grabbed 16 of their rebounds off the offensive glass.

This was the third consecutive game where the Aztecs outrebounded their opponent.

“It’s been an emphasis this whole season, especially with teams who crash a little bit more,” senior guard Taylor Kalmer said. “That’s something we worked on quite a bit and made sure that we had that nailed down.”

Production off the bench also pulled through for the Aztecs with 21 points added from the non-starters.

Notably, it was Villa who sparked a light coming off her seat.

Villa scored nine points, nine rebounds and three steals. Both the points and rebounds were a new career high for Villa while she tied her high in steals.

“I think it goes back to what we were talking about, our culture. These kids have bought into what we’re trying to sell. (Villa) is just one of the pieces to this puzzle, they never complained,” Terry-Hutson said. “They always put their head down and work. It’s nice to see some of their hard work pay off.”