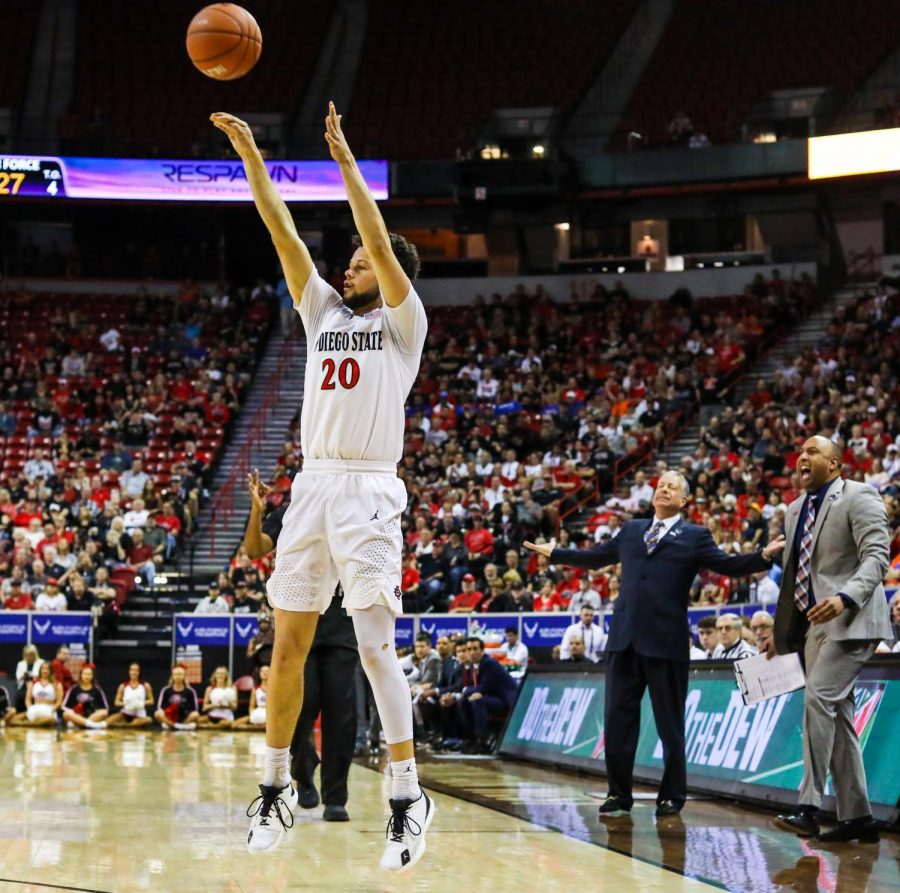 Junior guard Jordan Schakel attempts a 3-pointer during the Aztecs’ 73-60 win over Air Force at Thomas and Mack Center on March 5. Air Force head coach Dave Pilipovich is visibly upset of Schakel taking that shot. Schakel had a team-high 17 points.

Aztecs use second half defense to shut down Air Force, advance to MWC semifinals

At 28-1, a No. 5 ranking in the AP Poll and having clinched the Mountain West regular season title three weeks ago, San Diego State men’s basketball was going to get its next opponents’ best shot each time the team takes the floor – something they have been used to in at least the past two months now.

No. 9 seed Air Force, after coming off a win about 24 hours earlier against No. 8 seed Fresno State, had never won a game in a Mountain West quarterfinal.

It was inevitable the No. 1 seeded Aztecs were going to get the Falcons’ best shot Thursday.

“If that group’s not motivated and excited about playing a quarterfinal of the Mountain West, which we’ve never advanced past, and playing a top-five team in the country, then we’ve got the wrong group of guys,” Air Force head coach Dave Pilipovich said Wednesday. “We’re going to be ready to go.”

The Falcons were ready to go as evident to their 60% shooting in the first half, which is the highest first half percentage SDSU has allowed all season.

After trailing 37-33 at halftime, the Aztecs came back and defeated Air Force by a final score 73-60 in the MWC tournament quarterfinal on March 5 at the Thomas and Mack Center in Las Vegas.

Here are three observations from the Aztecs’ quarterfinal win, which is the 13th straight year they have advanced to the conference tournament semifinal.

1. After slow start, Jordan Schakel heats up in second half with Wetzell and Flynn right behind him

Aztecs junior guard Jordan Schakel shot all 3-pointers and made only 1-of-5 of them in the first half.

In the second half, Schakel caught fire by scoring 14 points and making 4-of-5 from distance. He finished with 17 points on 10 shots – all from beyond the arc.

Schakel’s five 3s tie a career-high, dating back to Nov. 9 on the road against BYU when he nailed all five of his 3-point attempts in the second half.

“He just kept shooting,” Aztecs head coach Brian Dutcher said of Schakel’s second half. “We want him to shoot every open look he gets, and if he goes 0-for-7, we want him to take the eighth shot because that’s what he does – he’s an elite-level shooter.”

But before Schakel’s second half, senior forward Yanni Wetzell started off 4-for-4 with eight points. Wetzell followed a strong first half up to finish with 16 points on 8-of-11 (72%) shooting.

Aztecs junior guard Malachi Flynn matched Wetzell with 16 points of his own, shooting 4-of-10 from the field and 2-of-6 from distance.

Flynn led SDSU with seven rebounds and eight assists on top of leading with 34 minutes played. His backcourt mate, senior KJ Feagin, has been nursing an ankle injury in recent days but seemed fine after playing over 30 minutes.

2. Aztecs’ defense flips the script and locks down Air Force in second half

After allowing the highest first half field goal percentage (60%) of any opponent this season, the Scarlet and Black held the Falcons to 27% shooting after intermission.

But SDSU is no stranger to picking it up in the second half, outscoring opponents in each of the past eight contests.

Thanks to increased intensity and guarding the ball better, the Aztecs took their defense up a level (or two, or three).

“Their defense,” Pilpovich said of his team’s second half struggles. “They’re really good defensively, individually, collectively as a unit. Their team defense – one of the best in the country, and they’ve always been that way.”

After allowing opponents to shoot 50% in the first half in each of the past three games (each time SDSU trailed), Dutcher was tired of letting teams make half their shots in the first half.

“I told them I am tired of teams shooting over 50 percent against us in the first half, so they let Air Force shoot 60,” Dutcher said jokingly.

That happened about 24 hours earlier and apparently carried on to the first half of the quarterfinal against SDSU.

Air Force was scorching hot from the floor, which led to 37 first half points.

“A lot of shots were just good shots on their part,” Flynn said. “I think we got to give credit where it’s due. They made some tough shots. And then the second half, I think we just continued to guard and eventually they started missing those. So it’s hard to make all those shots for 40 minutes.”

Despite Air Force’s offensive fireworks, SDSU managed to only trail by four by making 14-of-29 (48%) of its shots.

“(Wetzell) is a very good offensive player, and we take somewhat of a step back offensively when he’s not in there,” Dutcher said. “We don’t have a low-post presence.” 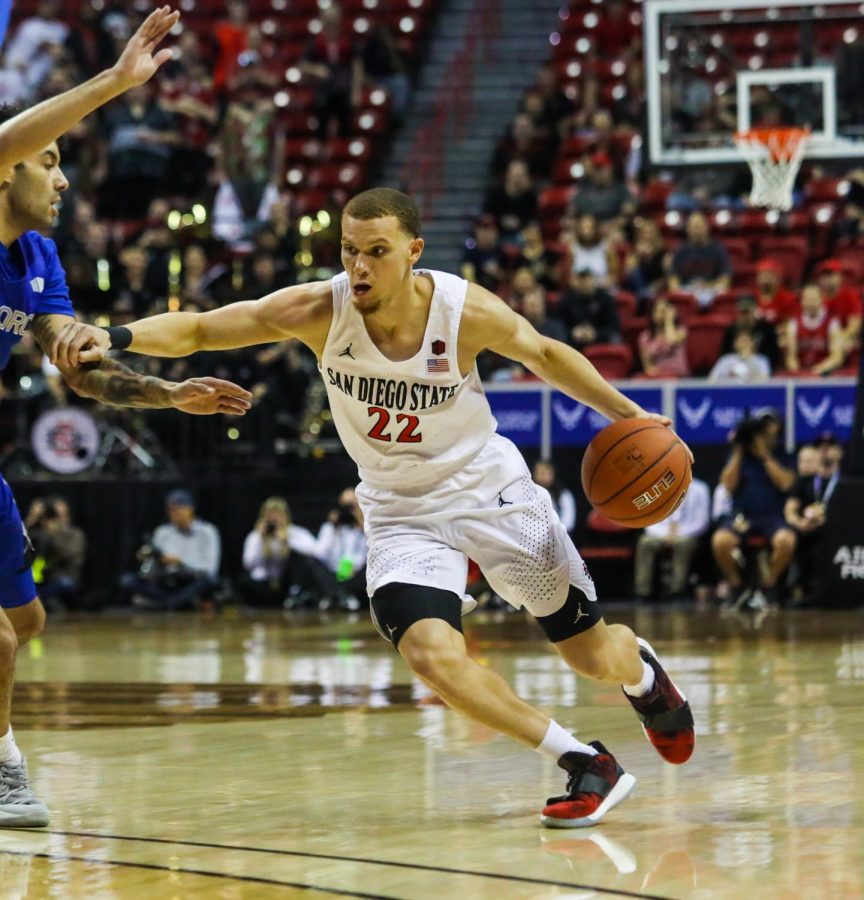