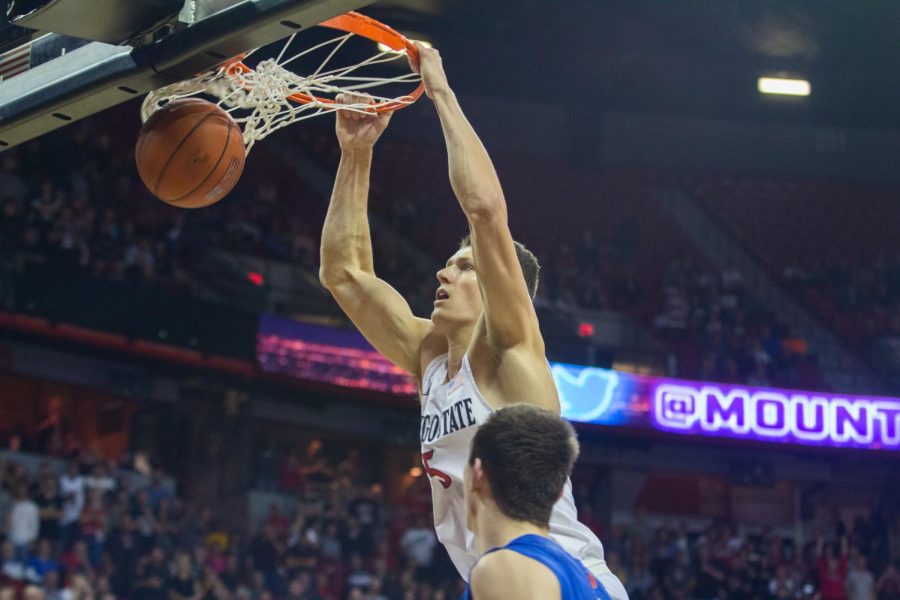 Senior forward Yanni Wetzell completes a slam dunk during the Aztecs’ 81-68 win over Boise State on March 7 at the Thomas and Mack Center in Las Vegas.

The Scarlet and Black lost to the Aggies in the title game by a score of 64-57.

This time around, the Aztecs look to avenge that loss.

Same programs but different feeling inside Thomas and Mack Center

The last time these two teams met inside UNLV’s home gym, Utah State was able to pull away late in the second half to claim its first-ever conference tournament trophy.

This year, the Aztecs are regular season champions.

Last March, SDSU had possession of the No. 4 seed and the Aggies had control of the No. 2 seed.

Utah State is the same seed as it was one year ago, but the Aztecs are now the No. 1 seed.

With implications such as a possible No. 1 seed in the NCAA tournament on the line, junior forward Matt Mitchell said the Aztecs are looking to avenge last year’s loss in the MWC title game.

For the Aggies, the title game is nothing short of different.

Utah State senior guard Diogo Brito said although the two teams are meeting again, it won’t be the same as a year ago.

The Aztecs already beat the Aggies twice this season: once in Logan and once in San Diego. But the win at Viejas Arena required a second-half comeback after the Aztecs trailed by 8 at halftime.

In its past five games, SDSU has either trailed or been tied with its opponent at halftime.

The Aztecs were down by as many as 16 against Boise State Friday but were able to make a push to tie it at the intermission.

“It’s just that time of the year where every other team is kind of hitting their stride so the ante is getting upped a little bit,” Feagin said. “But we’re resilient and we’re a talented team so we know that we’re going to get everybody’s extra best shot at this point.”

Dutcher said confidence is key to his team’s second-half comebacks.

“Confidence and talent, swagger, belief. They never think they’re out of a game,” Dutcher said. “If you don’t have confidence, you have no chance, and this team has great confidence.”

No. 2 seed Utah State ended No. 11 seed Wyoming’s Cinderella run in the conference tournament with an 89-82 win over the Cowboys just hours after SDSU clinched a championship game berth.

But a game of this importance holds even more significance for sophomore guard Adam Seiko, who has experienced both sides of the championship spectrum in his third year on the Mesa.

Even though the Aztecs have only lost one game this season, Dutcher said the team can’t afford to take any team lightly, especially a team like Utah State.

“As good as we’re playing now, we think there’s another level we can play at and we have to try to get there tomorrow,” Dutcher said.

Aaron Tolentino contributed to the reporting of this story.

The Mountain West tournament championship is minutes away. @ambersalass previews the action. pic.twitter.com/BZzH6b75QS