by Aaron Tolentino and Kyle Betz 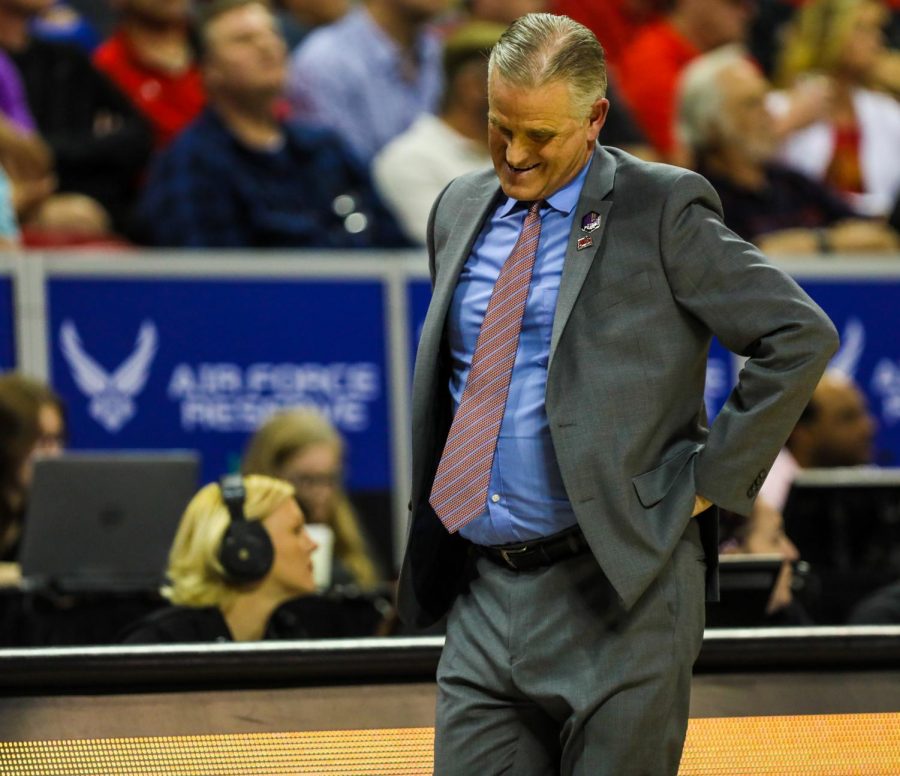 Head coach Brian Dutcher looks down in disappointment during the Aztecs’ 59-56 loss against Utah State at Thomas and Mack Center on March 7.

Merrill took it upon himself to bring the ball up the court and win it for the Aggies.

He did so by hitting a contested 3-pointer in the face of Aztecs senior guard KJ Feagin with 2.6 seconds left. Those three points were the most significant of Merrill’s game-high 27, along with playing all 40 minutes.

Though the Aztecs were up as much as 16, the final score would be 59-56 Utah State over SDSU in the 2020 Mountain West Conference tournament championship game on March 7 at the Thomas and Mack Center.

“We wouldn’t have it any other way – best player, best defender on our team on Sam Merrill,” Aztecs junior guard Matt Mitchell told The Daily Aztec outside the losing team’s locker room. “Sam just made a tough shot at the end of the day. That’s just all it is to it – nothing we can do about it. KJ did everything he could, (Merrill) made a tough shot.”

Here are three observations from the Aztecs’ 59-56 loss to Utah State.

1. Aztecs shoot 34% while Aggies drop 38 points in the second half

After putting up just six points, six rebounds and three assists in 27 minutes against Boise State Friday, senior forward Yanni Wetzell had a first half to remember Saturday.

He nearly totaled a double-double in the first 20 minutes by scoring nine points and collecting 10 rebounds.

The New Zealand native did all that while holding Utah State sophomore forward Neemias Queta to four points and four rebounds in the first frame.

The second half, though, belonged to Queta more than it did Wetzell.

Wetzell said he struggled to play a full 40 minutes.

The Aztecs’ backcourt also had a tough time shooting from the field.

Basketball is a game of runs, and that showed in the second half for the Aggies.

Utah State opened up the second half with a 5-0 run to bring its deficit to only one point, following that up with a 6-0 run.

In the first 10 minutes, the Aggies shot 60% from the field, including 75% from deep. A huge difference from the first half, when last year’s tournament champions shot 30% and 21% from range.

Merrill was held to 10 points in the first 20 minutes but ended up with 17 second-half points to give Utah State the win.

The Aggies ended the second half making 56% of their shots.

But the junior duo was contained by the Aggies defensively.

Mitchell tallied four rebounds and four assists but had little success scoring by shooting 1-for-7 from the field with just four points.

Mitchell’s first basket came just over five minutes after tip-off but was held scoreless for the next 29:59.

It wasn’t until 4:38 left in the game when Mitchell scored his first points of the second half — two free throws.

“Matt didn’t have a great game today. Obviously, I think he’d be the first to say that,” SDSU head coach Brian Dutcher said. “He had an off game today, but I don’t doubt when we play our first-round opponent in the NCAA tournament, he will be ready to go.”

Schakel was shut down offensively (0 points), shooting 0-for-3 and collecting three fouls in 29 minutes played.

Dutcher said the Aggies were able to play contain Schakel by solid perimeter defense off the dribble.

3. Aztecs snap out of first half struggles

The streak is finally over.

SDSU has not had a halftime lead in the last five games until Saturday – also marking the first time the team did not allow its opponent to shoot over 50% in four games. The last time it had a lead heading into the locker room was on Feb. 16 in Boise, Idaho.

Though SDSU only shot 33%, it was the defense that helped contribute to the first halftime lead in 20 days.

The Aztecs now wait until March 15 for Selection Sunday for their seed in the 2020 NCAA tournament. At 30-2, SDSU will likely remain as the team with the fewest losses in the country.

Our coverage of the 2020 Mountain West Conference tournament concludes with @ambersalass recapping the Aztecs' 59-56 loss to Utah State in the title game. pic.twitter.com/T3HCRmj1bv 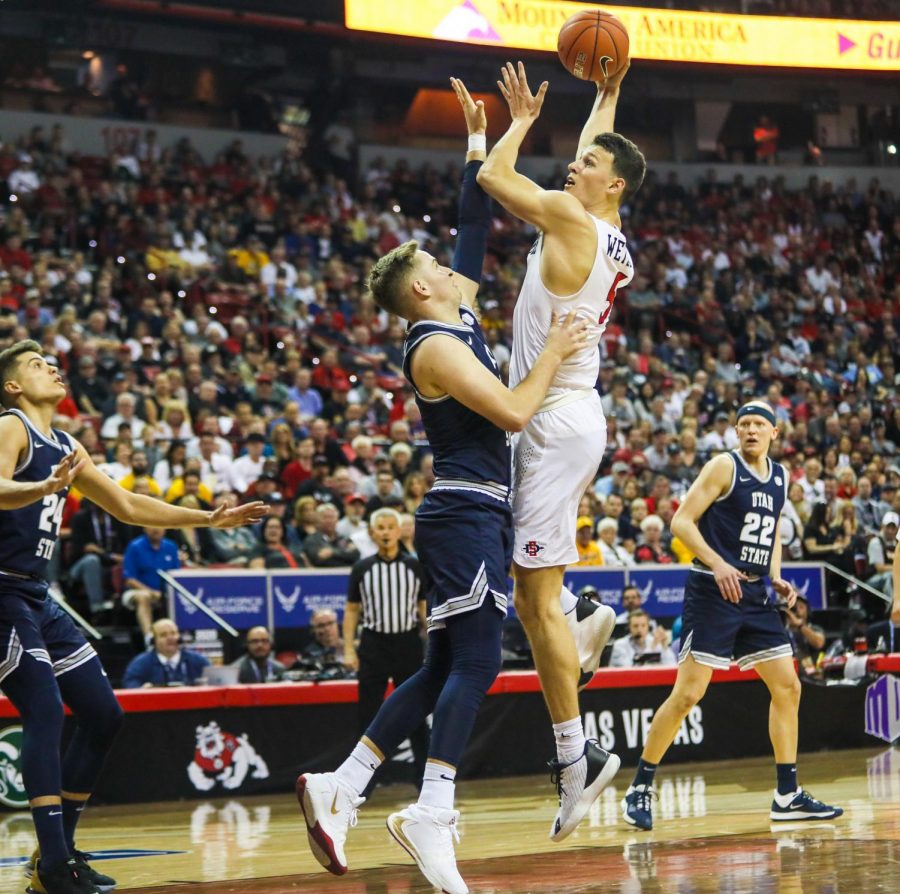