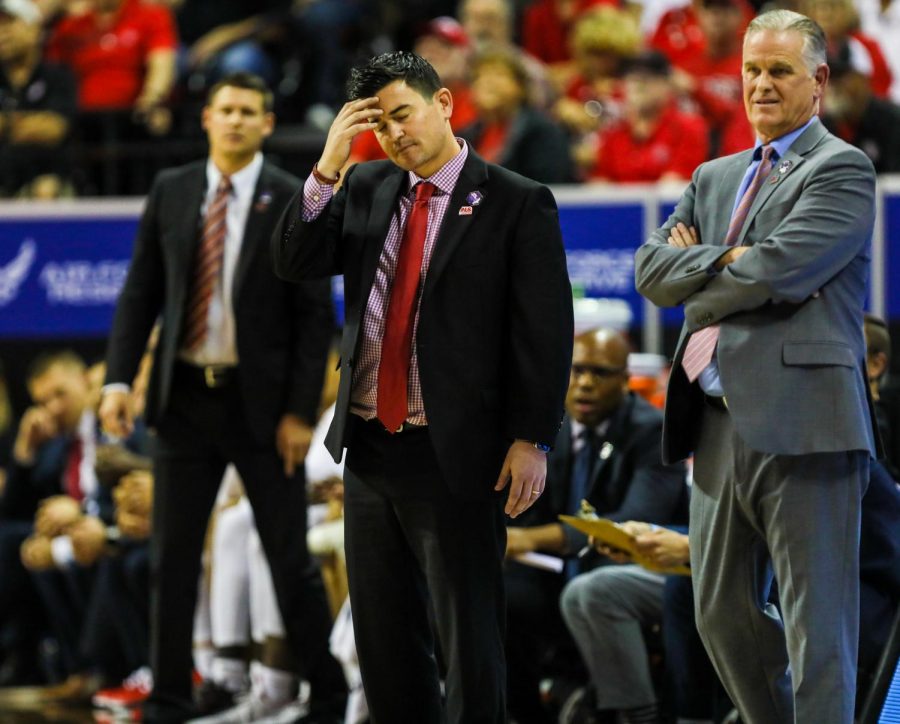 Aztecs assistant coach David Velasquez (middle) puts his head down in disappointment during the Aztecs’ 59-56 loss to Utah State on March 11 at the Thomas and Mack Center.

The NCAA has announced it will limit future attendance of sporting events in light of the COVID-19 outbreak.

NCAA President Mark Emmert released a statement today via a press release regarding the coronavirus scare:

“The NCAA continues to assess the impact of COVID-19 in consultation with public health officials and our COVID-19 advisory panel. Based on their advice and my discussions with the NCAA Board of Governors, I have made the decision to conduct our upcoming championship events, including the Division I men’s and women’s basketball tournaments, with only essential staff and limited family attendance,” Emmert said in a release. “While I understand how disappointing this is for all fans of our sports, my decision is based on the current understanding of how COVID-19 is progressing in the United States. This decision is in the best interest of public health, including that of coaches, administrators, fans and, most importantly, our student-athletes. We recognize the opportunity to compete in an NCAA national championship is an experience of a lifetime for the students and their families. Today, we will move forward and conduct championships consistent with the current information and will continue to monitor and make adjustments as needed.”

For the moment, it is unclear whether— in addition to the fans — media will be allowed access to attend events as well.

San Diego State men’s basketball team is just over a week away from beginning its run at the national tournament.

With the new rule, the first round of the men’s tournament will be played without fans in attendance.

“Weird,” Aztec junior forward Matt Mitchell said Monday on potentially playing without fans in attendance. “Honestly, I think potentially if we were to play in an empty arena, I’d rather play in the JAM Center. That’s the way I feel.”

“Potentially” has now turned into “will” play in front of an empty arena.

If SDSU is assigned to play in Sacramento next Friday, expect the Golden 1 Center to be filled with only essential members of staff and a select number of family members.

Across the globe, multiple sporting leagues also have taken the stance of banning fan attendance or suspending games indefinitely.

The Ivy League Council of Presidents made the decision to cancel all of its athletic events running through the remainder of the spring.

The Golden State Warriors announced Wednesday that events held at the Chase Center running through March 21 will be canceled or postponed.

Italian prime minister Giuseppe Conte made the announcement this past Monday that all sporting events, including soccer matches in the Serie-A, within the country will be suspended until April 3.

Currently, the coronavirus has surpassed 120,000 known cases worldwide according to The Washington Post.