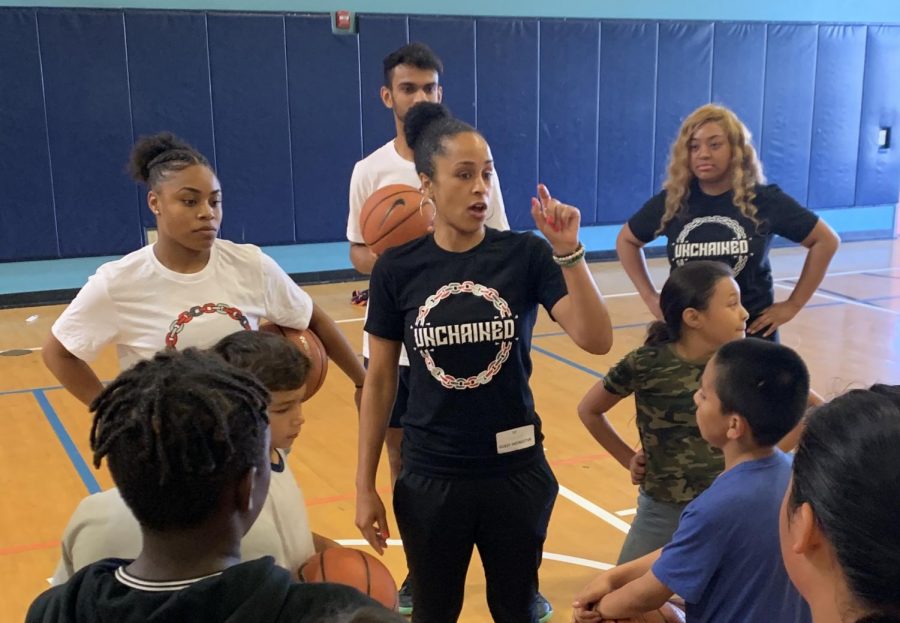 Women’s basketball coach assisting off the court, starts nonprofit to give back

San Diego State women’s basketball assistant coach Ciara Carl had a vision to inspire youth and give back to the next generation.

Last fall, that vision became a reality when Carl started her own nonprofit: Unchained.

The organization’s mission serves to touch young lives and bring hope for those who have dreams.

In its first year of existence, Unchained partnered with the Monarch School located near downtown San Diego.

Monarch is a K-12 school that hosts children impacted by homelessness. Through education, the program helps students develop the necessary skills and experience to set up for success in the real world.

“For them just to see that it’s possible, that’s a big thing we want to do,” Carl said. “We want to give hope for them to dream.”

Unchained has worked in particular with a group of kids at the fifth-grade level.

So far, three sessions have taken place over the past couple of months. Each session is two hours long.

They first start out by playing basketball with the kids inside the school’s gymnasium. Then, the children step inside the classroom writing in journals about various character development topics such as self-love, leadership, facing adversity and goal-setting.

It’s optional for the children to share what they’ve written in the journals, but many of them open up and choose to let others get a glimpse of what it’s like to be in their world.

Afterward, a guest speaker lectures about the challenges they faced in an effort to connect with the class but also to prove there is still hope.

The speakers tend to be people who came from challenging backgrounds and had similar experiences to the kids, but overcame those struggles and are now thriving as adults with professional careers and families of their own.

“It’s to inspire them, to impact them so that they know they have hope for the future,” Carl told The Daily Aztec. “They can be themselves, stretch from their lives and experiences right now so they can be different and strive for something better.”

Carl, a former guard at Point Loma Nazarene University, first pitched the idea of Unchained to her best friend and teammate Jessica Walton several years ago. Walton and Carl have known one another for almost 20 years.

“It’s been special experiencing that with (Walton),” Carl said. “Going from playing with each other at Point Loma to now where we are as women is awesome.”

Unchained has received lots of support from the Aztec women’s basketball team.

Players have supported the organization by purchasing and wearing t-shirts, spreading the word on social media and volunteering at the sessions.

“It’s been a really cool thing because we both like kids,” Adams said. “Coach (Carl) is very passionate about it, so I love seeing her get excited and she has a lot of great ideas.”

The two Texas natives are no strangers to helping others.

The duo from last year’s Mountain West All-Freshman team has a history of helping local food banks and special needs children in their respective hometowns.

With Unchained in San Diego, both have used their platform to benefit the Monarch School community.

The room brightens every session when the players come face-to-face with the kids. They get the chance to take pictures, get autographs and chat with their role models.

“It’s a really good feeling you don’t realize the impact you have until it’s actually happening,” Ramos said. “For us, we were in the same position as those kids, wanting to take pictures with people we idolized. It’s cool being that person for them.”

Both players mentioned how Carl has not only inspired the children but themselves as well.

Ramos said one day she could see herself and Adams create an organization of their own.

“I could definitely see us doing something like this,” Ramos said. “It’s super cool getting to see everything coach Carl has done. For sure down the line, we will probably have this cross our minds to do.”

In the first session held at Monarch, Walton was the guest speaker.

Both Walton and Carl understood that partaking in sports shouldn’t be taken for granted. Not everyone has the opportunity, especially those coming from low-income areas.

Through Unchained, however, these sessions expose kids to sports and much more.

“They don’t get the opportunity to be a kid oftentimes,” Walton said. “They’re raising and taking care of their younger siblings, trying to figure out their next meal and where they’re going to live next week. This is an amazing time for them to just be kids, be themselves and connect with each other.”

When Carl reached out to Walton about speaking to the kids, she knew she couldn’t miss out on connecting with them.

“They could feel I understood where they came from, what they were going through, but I also was trying to show my vision of what could be,” Walton said. “It doesn’t always have to be where they’re at right now. They don’t always have to struggle, they can have dreams and make it out of poverty.”

Walton helped Unchained bridge the connection with the Monarch School. She was the school’s first California Interscholastic Federation basketball coach that worked closely with the program’s Director of Athletics Jesus Nuñez.

After finding himself waitlisted for law school, Nuñez temporarily found a teaching assistant position at the Monarch School.

The rest is history.

Although it changed his life and career, Nuñez said it was a blessing in disguise. He founded the athletic and physical education department, allowing him to exercise his vision of creating a level playing field for all students.

Under his tenure, Nuñez granted the school its own CIF program, which has been running for the past six years.

“Everybody who is in education, it’s those intrinsic benefits and values that keep us going,” Nuñez said. “It just shows the work you put in, the time, the effort is paying dividends and you can see it in how our athletes compete, grow and develop.”

Monarch provides a wide range of services for its students, but Nuñez said working with Unchained benefits the kids to see things in a different light through athletics.

He mentioned how part of Monarch’s mission is to have “coachable kids turn into employable adults.”

“Everything that Unchained stands for is what we work for in education-based athletics,” Nuñez said. “It’s not about the final scores but how you arrived there and who you are as an individual.”

Carl, Walton and Nuñez all agree it’s important for athletes to recognize the impact they can have on their community.

Unchained had one session left planned later this year on April 14 at the Monarch School, but due to the recent COVID-19 coronavirus outbreak, that event has been postponed.

The organization has a page on Instagram (@unchained_15), which is currently accepting donations toward its cause.